In the morning overcast, but warmer and less windy. In the afternoon warm and sunny weather. In the evening rain and again windy.

I slept poorly at Berlin's campground, because the noise from the nearby Tegel airport bothered me a lot. In addition, a rowing competition on the canal just a few meters from our tents. Through the megaphone the coxswaines shouted to the rowers and, alas, also to me inside my tent. Why they had to start at 7 in the morning, is incomprehensible to me. And we even had plenty of time today. A morning bath in nature was ruled out today, anyway and we had agreed to spend a slow morning in the campsite. Fortunately, I could buy rolls and milk in the hotel that was part of the campsite. But of course we were not allowed to have breakfast on their terrace. We did this on a bench, to which I was allowed to carry a table from the campground's beer garden. Before, I put laundry into the washing machine, with kind help of the camping warden. Only Simon had dirty laundry. Alexander is apparently also thrifty in his clothing bout. We enjoyed ambling around the site and have all the time we wanted. We also played table tennis and I enjoyed a weissbier on the hotel terrace. When the clothes were finally dry in the dryer, it was time to pack the tents together and cycle into Berlin's city centre. Here we had booked two double rooms at City Stay Hostel in Mitte, very close to the TV tower and directly opposite the Church of Mary. In the evening this Saturday, Simon's girlfriend Signe would arrive at Alexanderplatz by way of Flixbus and the subway, and then we had two whole days in Berlin together before returning home on Tuesday. But there were only 17 km into the centre, so we had lots of time. The path ran along the canal, the Hohenzollern canal, where the rowing competition had taken place in the morning. At one point, the route hit a sharp bend to the north, and it turned out to be an american football stadium we were going around. Simon told that Berlin Adler is one of the best European football clubs. They have been it turns out, for research on the web shows that they are relegated into the second best German series after five years ago winning the European championship Eurobowl. Their stadium, Poststadion, is listed because of its functionalist architecture from the 20s. It is located in the Moabit district, which is characterized by canals, large port facilities and associated old industrial plants. We approached Mitte, but first went through the Wedding working area. Here hunger attacked us without having enough provisions in my left handbag for it to settle it, so we found a small supermarket in a side street a little away from the canal we were still following. Great was my joy as I saw the fried potato pancakes in the fridge. And I know that Simon is also very happy with this German specialty, which I know from the northern German cities of Hamburg and Flensburg. Here in my childhood many Puffer-Buden could be found especially in the port area. Puffer is the German name for these little pancakes, which are made out of a dough of raw, grated potato and onions, eggs, flour and a little salt, which are then fried with diced smoked bacon and eaten with - applesauce. Yes, surprisingly enough, but apples and potatoes ("pommes de terre") go well together. So I found a big glass of apple sauce and thought I was the hero of the day. But definitely only Simon was happy, but, in solidarity with his big brother, did not really dare to express his joy. Alexander considered it too long a process to heat them on the pan instead of making sandwiches and protested loudly. But, nevertheless it didn't take long before "puffers" sizzled on the pan in the oil I had also bought a small bottle of. My problem was that my cooker was broke, so I had to ask Alexander for his. Quite an embarrassment. And he wasn't interested in that food at all. In addition, we had not found a bench with a table by the canalside and sat on a bench among the dumped garbage out to a cobblestone road and cooked and ate, so it was anything but luxury. But it was in coherence with this neighbourhood, Wedding, which is a deprived part of Berlin. I remember the German TV series "Ein Mann will nach oben", a kind of German Matador, also from the late 70s, but playing at the beginning of the 20th century. Here "the matador" Karl Siebrecht lived with his genuine Berlin under-class sweetheart Rieke, who is very simple, but cheeky as a butcher dog. At one point, she rents a tavern with her boyfriend's companion Kalli right here in Wedding, where the drinking was heavy then, simple to make life bearable and have some fun in the gray and hard everyday life. Here, where we sat, they had done a lot to bring colors into the picture by painting the houses in fairly wild colors, as can be seen in the picture. 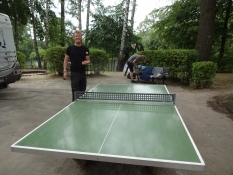 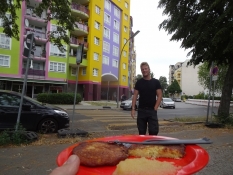 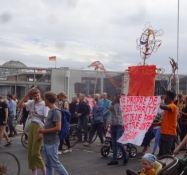 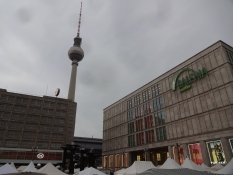 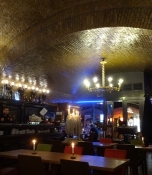 Now we only had to cross the museum island, where Germany's most amazing art treasures are on display in four magnificent museums, before we arrived at our hostel. It can not be situated more central and at the same time peaceful in a small side street almost without cars just a few steps out to the great Karl-Liebknecht-Strasse, just opposite Berlin's oldest church Marienkirche. which had miraculously been left standing after the many bombs the Allies had rained down over the city at the end of World War II. From here, it's are also not far to other top attractions such as the TV Tower and Alexanderplatz. For the time being, we just wanted to rest a little and enjoy the luxury of a bed and a double room when otherwise sleeping in a tent. As Simon would be "visited" by his girlfriend Signe a few hours later, the two lovebirds shared one double room, while Alexander and I shared the other twin room. Now we were accommodated for two and a half days stay in Berlin and we felt we had the time on our side. And we were in the opening phase and mentioned a lot of things we would like to see plus Signe had also aired a few, which Simon was smart enough to bring on now too. And we were smart enough to let her decide too. So we left the detailed planning until she joined us. Before her arrival on the subway, three of us tried to enjoy Alexanderplatz, not named after my son, but one of the Russian czars named Alexander in connection with a state visit. But the rain, which unexpectedly began to splash down, made it difficult, so we ventured into the electronics temple of Saturn. The many offerings on everything within electronic platforms didn't interest me, so I agreed to follow Simon down to the subway to receive his girlfriend. Then Alexander could just as well go along, and Simon was not allowed to celebrate the reunion with Signe in private. They had to wait until they were in their double room. Until then, we spent a wet evening near our hostel. Wet in several ways. It kept raining, but we also let some wet goods pass our throats after enjoying Vietnamese food on a good visit to the neighborhood restaurant. Simon is quick to find the kind on his phone over Google Maps. Signe, who is a vegetarian, was not impressed with the range of dishes in that segment, but we were too hungry and tired to let her drag us out into the street in further search for moss. We other meat eaters had nothing to put on the food and ate with glowing appetite. Afterwards, I suggested the nearby Hackescher Markt as tonight's venue for revival, and we did. Here, the 100-year-old Berlin subway runs above, and below there are all kinds of bars and restaurants with beautiful domes and an atmosphere of old-fashioned industry. We went to the Grand Rocka bar, which serves good beer and sophisticated drinks. Afterwards we visited the house brewery Lemke. Simon and Signe are, like me, members of the Danish beer enthusiast association, so it was an obvious choice to try some of the local brew. I went all-in and ordered a meter of beer in six small sample glasses. True beer enthusiasts appreciate diversity rather than quantity. Signe tasted the Berlin specialty Berliner Weisse mit Schuss, ie wheat beer with fruit shot. The classic shots are raspberry or wood sorrel (Waldmeister), but today you can get many different. In any case, we enjoyed our stay here brilliantly and everyone was happy that we were (re) united in this lovely city which lay at our feet for the next few days. 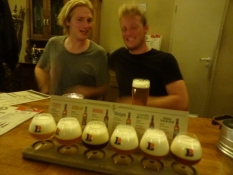