Overcast with frequent and heavy rain showers. Chilly, about 15°C and very windy with a stiff breeze from East.

A day on the bike friendly roads of Aeroe. The splendid new gravel path along the sea must be noted separately. Apart from that minor tarmac roads with very lillte traffic apart from in the town of Marstal.

Today stage was significantly shortened due to the nasty weather, just 34 km in stead of 46.

On Saturday, Michael and I started with a fresh morning dip from the campsite's bathing jetty. Three ladies had the same idea, so we had put our trunks on. As we trudged back to the cottage where Bernhard had procured and cooked coffee, it rumbled above our heads, and while we were eating muesli and muffins, a violent thunderstorm came, with torrential rain and lightning and thunder. Once I could feel the thunderclap in the chair and the floorboards. Well, then we were not in a hurry saddling our iron horses, but let them rest a little longer. But eventually we were off. We had to, because cycling weekend is, yes, cycling weekend. Bernhard even thought we had left late. 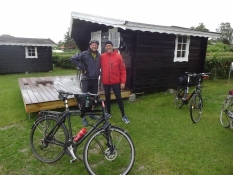 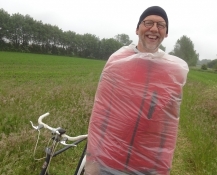 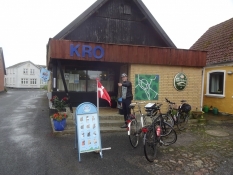 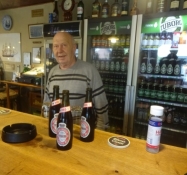 The trip today I had planned as a South Aeroe round trip of 45 km. The terrible weather changed, however, our plans. On the first stretch it was, however, dry weather, while we rolled in through Aeroeskoebing's picturesque old town with the most beautiful and smallest houses we have in this country. Then followed a relatively new cycle path along the water to Kragnaes. Here we wanted to visit the megalithic grave, but were badly disappointed as it was closed off with a concrete wall. And just while we were there came a little rainstorm, so it had been nice to crawl into the burial chamber. Michael and I had done so ten years ago during a similar bike tour. A sign told of danger of collapse, and we thought it was ridiculous, because the grave had stood since the Younger Stone Age 5,000 years ago. It would probably stand for a few more years, we thought. But the sign explained that the cover stone was only laid on top of the burial chamber during a hefty restoration in the '70s. The 1970s that is. Well, that explained a lot. Something that is 5000 years old may well stand, but something that is 50 years old cannot. The world is a strange place sometimes. Shortly after, we were in the village of Ommel, which was to become our base today. The weather and not least the inn wanted it that way. A real brown pub from before the world went nuts. Inside there was a sour smell of smoke, but it was dry, Danish top-ten music was heard from the speakers, and foamy Red Tuborg was served in classic beer glasses. Shortly after, the sun was out again outside,  and the three musketeers again climbed their fiery steeds in order to "conquer" Ommelshoved. Here the packed lunch could suitably be eaten, for beer alone was not sufficient. But just as we were standing in the bare, treeless nature out there, a particular hefty rainstorm came, and via a short stay in a flea market tent shed we soon ended up again at the Ommel inn and humbly asked permission to empty our lunch boxes there, if we ordered more hop juice. It was a deal. During our first visit, the innkeeper had been alone, but now several local residents had arrived, who puffed and drank like soaks. That inn was also one of our late Funen national football coach, Richard Moeller Nielsen's favorite laces on Earth. Supposedly, when he longed for a place as unsportsmanlike as possible. Before our departure we were briefly judged by one of the vixens at the bar and I scored the first place in her assessment of our appearance. This made me busy pushing my brothers out of the inn. Well, thanks, I'm not in need! 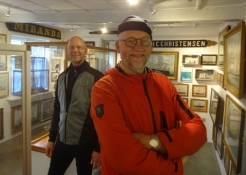 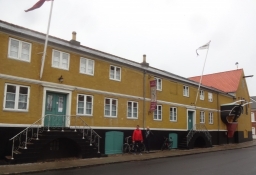 We had not cycled very far yet, and before long we were in Marstal. Here in the island's largest city we visited the Maritime Museum, because Marstal is a real sailor's town. Its harbour has made it famous around the world, and we got many examples of this at the museum. It was really well made and the whimsical human destinies at sea evoke both longing and, for me, the joy of keeping solid ground under my feet. One Marstal sailor had almost become Chinese, complete with language skills and art collection. One could crawl down into a ship's hatches and up on its bridge, where I almost got seasick from seeing a simulated sea in violent unrest. Pooh, I'm a real land crab. After the visit to the Maritime Museum, we cycled approx. 50 meters before we were stopped again. Café Havkatten lured us with coffee and cake. And the weather was still chill, wet and windy. It also meant that the entire rest of the day's planned cycle route was skipped in the skipper's town. We simply cycled back to Aeroeskoebing along the cycle route, which is even shorter than the road. It does not often happen, but the path along the water where we had cycled in the morning made it possible. Now the wind blew even more violently, now in our tails, so we were soon in Aeroeskoebing again. 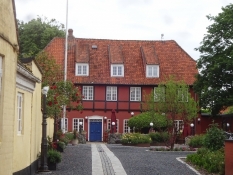 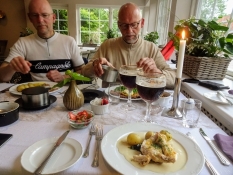 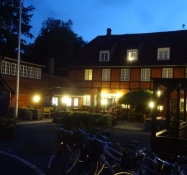 It was not really weather for barbecue, as we often do on Saturdays on our bike weekend, so we popped in at the Smokehouse at the harbour. And should probably have ordered and taken some smoked fish with us to the cabin, because when we studied the brochure there, we discovered that the Smokehouse closes at 7 pm, and that we would not be able to make it. Instead we rolled into town and let our eyes, stomachs and wallets decide where we were going to dine. And so hotel Aeroehus was visited by three hungry middle-aged gentlemen, and was entrusted to make them happy and full. And succeeded in doing so! In large empty rooms we were served three different dishes, all of which fell to our liking. Plus one more Aeroe beer and a chat with the busy hotel mum, who also had a round birthday to attend to. These parties had just been allowed back after the corona shutdown in the spring. It was interesting to get an insight into what this implied for a hotel like Aeroehus. They missed the tourists, especially the sailors from Germany. But little by little, they were on their way back. Otherwise the streets of Aeroeskoebing were dead as a graveyard or Kragnaes megalithic grave. And this was a Saturday night in mid-June. But okay, the weather WAS miserable. Therefore, we adapted to the dead atmosphere and hit the hay with the chicken at the campsite.