Rain all day long. Along with that a moderate to brisk breeze from south and southeast, so mostly headwind. Temperatures about 14 to 15°C.

Somewhat bigger roads than planned, but these had all bike lanes.

I changed my route due to the weather, so I didn't follow the fiord coastline into Horsens and headed for the Horsens to Vejle main road after my visit at Purhoej. In Vejle I skipped the planned goal in Middelfart because of the second puncture of the day and took a train home to Odense from there. 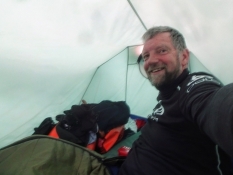 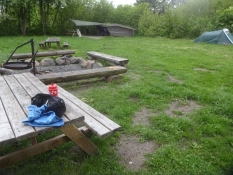 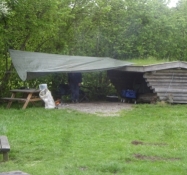 The morning on the Brigsted campsite was very wet, so I had my breakfast inside my tent. I used the awning and had to close it in order to have a dry space there. In a peculiar way it stopped raining for a couple of hours before my departure, so the tent was almost dry, when I hoisted in on the bike. As soon as it was on my bike, it began spitting with rain again, and so it kept doing for the rest of the day.

During breakfast I decided to shorten my route considerably. The wind was also blowing from the south, and I simply lacked the motivation for going 90 km today, still in quite rolling terrain. And so I did. I bid the Vietnamese guys farewell. They had packed their belongings onto a large cart, which they dragged to their car.

My first goal was the big town of Horsens by way of the main road from Odder. In the centre I invited myself to a roll with coffee in a café in the hypermarket of Bilka. They have a strange order of trade there. First you tell the attendant what you would like to have. Then you pay, and then you're allowed to take the things you've paid for. They must know themselves what that is good for. I don't. 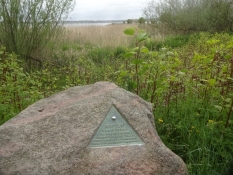 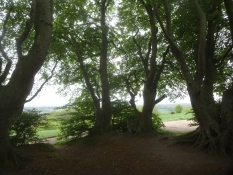 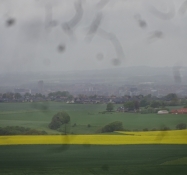 After Horsens I headed for the one and only highlight of the day, but this was one i the litteral sense. Purhoej with its 121 metres above sea level is a substantial hill by Danish standards, and I didn't want to cut it out after all. Even if the view from it had to be quite indifferent in the pouring rain. I followed the planet trail out to Boller. No matter, how many planet trails I've cycled, I don't stop wondering about the distance between the outer gas planets, while the inner ones, the rock planets, seem to follow almost immediately after each other.

In outer space, north of Boller, I had to realise that the zipper of my rainjacket had given up its service. It kept opening up. And this in pouring rain. Now this trip began to seem cumbersome. But there was more to come. Now my very brightly coloured cycling jacket had to shelter me only, but it managed that quite well, I must admit.

Now the distance to Purhoej was not long, but the hill still challenged me. On the way I fueled water at the Uth church. They were going to have a funeral there, but I was allowed to tap water.

Two thirds up the hill I left the bike in the roadside and hauled myself up the rest by foot. There's a very beautiful group of trees on the hilltop. It's almost magic even on a day like this, and the trees sheltered me from the wind, while i munched my sandwiches. The view wasn't worth mentioning, so I don't do that. I wonder, if there has been a kind of judicial place or maybe even a place of pagan cult up here. Well, the trees weren't that old, but I could feel a kind of magic. In this case a board of information about the place had, of course, clearly ruined it totally.

The rest of the stage was mere transport. My first goal was Hedensted along minor roads and from there Vejle on the main road from Horsens. Shortly before Bredal I had another puncture, number five of the trip. I wheeled my bike a little less than a kilometer into the village and fixed the puncture in another pedestrian viaduct due to the dry weather there. Now followed the pleasant discent tinto Vejle, where one goes from above 100 m to almost zero in about 3 to 4 km. My goal was the station, where I wanted to offer myself a large cup of coffee and a piece of cake before going on to Middelfart. However, 50 m before my goal my rear wheel was flat once again. Just 8 km after the last puncture in Bredal. Now I gave up. Who knows how many tmore punctures I would have before Middelfart on my worn down tyres. And I had to catch a train there.

So this lovely cycling holiday in mostly nice weather ended here in Vejle. A few hours later I was home again, not without being Covid-tested another time to confirm my negative result from Grenaa. In good spirits I cycled home through the rain to my home and mit wife.