A day on gravel paths immediately next to the Rhine, often on a dike. Out of Basel and the suburbs on the German side on bike lanes along roads with heavy traffic. Short detours to civilisation in order to buy food and get water. Otherwise a day in the nature.

First we find a radioshop so that Simon can buy himself a recharger for his mobile phone. Morning break at a kind of kiosk on the riverbank in order to spend the last Swiss franks. The route is well signposted, but it's very hot to ride in the sun along the river on gravel paths. Lunch break at a steep riverbank, where I have a swim after lunch, which we had to do some shopping for at a motorway petrol station. At one place the path is blocked but we manage to wheel the bikes past the road building machines that luckily are not in action. Afternoon coffee break at a set of tables and benches above the river. I have another swim in the river in shallow water. Problems with my bike as I do not succed in mending another puncture. We wheel out bikes to a boat club at the Rhine, where I borrow Simon's bike and take me rear wheel with me in order to have it fixed in Breisach. A bike repairer installs a new rim band and tube. The bad rim band was the culprit of all my nasty punctures. Simon patiently waited at the boat club café. Then together to Breisach and across the bridge into France to a very rural and beautiful campsite outside the fortified town of Neuf-Brisach. We pitched our tent in a lovely garden. Very cheap and nice campsite. Dinner at a pizzeria in Neuf-Brisach. Afterwards we have a closer look at the town with the straight streets with ramparts all around it. It's still very hot well into the night. 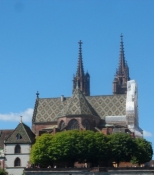 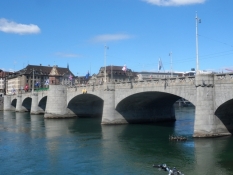 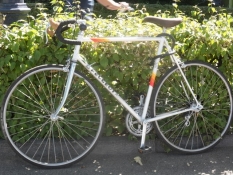 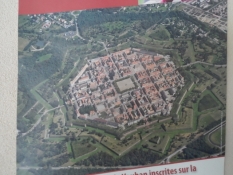