Overcast and chilly. In the evening sunny. 8 to 10°C during the day, after sunset cold and just 2 to 3°C. Moderate wind from North and Northeast, thus headwind up to Cape Kolka, then tailwind.

The fourth day of the Iron Curtain Tour's second part, the five-day-stretch from Klaipeda to Riga. Due to 43 km's deficit from yesterday (Ventspils instead of Mikeltornis) I did not make my planned goal of Mersrags. But I managed to decrease the deficit to 27 km. The longest stage of my whole trip at 129.17 km.

FB-post, May, 8, at 8.16: Good morning Friends from Ventspils in Latvia. After some days without internet your travelling friend sends a post from a hotel room. The bad Latvian Roads plus more headwind has slowed my progress, so I had to go on biking until 11pm yesterday and treat myself with a hotel. In chronological order, I arrived in Lithuania on Friday and enjoyed a nice and easy day in this country. Warm and sunny and perfect cycling paths through the pine forest along the coast. I attracted some attention and talked to many both in English and Russian. In the evening I cycled into Latvia and challenges began. The main roads are narrow, with potholes and often with heavy traffic. All other roads are worn down gravel roads with tough going. I found a lovely campsite in nature. The next day, i must admit; I chose a totally wrong route. Sandy trails through the coastal forest made me wheel my heavy bike fiancée for four hours. Got very thirsty but friendly people at a picnic spot gave me water and soon I was able to cycle again. But I still produced a kilometer deficit of 45, when I pitched my tent at Karosta, shortly after the port city of Liepaja. Here Russian times were very vivid. Old, derelict houses and Russian inhabitants, who still live here since Soviet times. Before that Karosta was a Russian Imperial naval port. I saw a beautiful church with gold covered onion cupolas. Yesterday I visited a holocaust memorial near Skede, shaped as a Jewish menorah. Here the Nazis had murdered over 2,000 of Liepaja's Jews. The Latvians, who had helped the Jews, were listed with their names. But others had participated in the killings. The cycling was again tough going. Again I got into a mess of sandy trails, so I had to cycle far, 69 km on the main road in moderate headwind just to make it here to Ventspils and not get further behind in kilometres. It wasn't pleasant going in the dark at last, but this hotel made everything good again. My plan is now to go two long stages of 122 today and 125 kilometres tomorrow to the top of Courland at Cape Kolka on tarmac roads and from there in a TAILWIND to Riga so that I can have a rest day there on Wednesday. I really hope, I'll succeed in that. You willl read from me again there. PS. The Latvians are friendly people but a lot more close minded than the Lithuanians. Hugs and cycological regards from Helmuth. 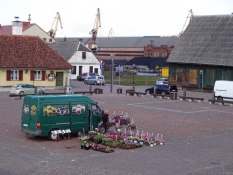 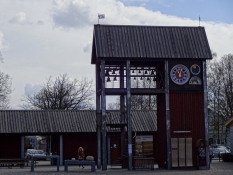 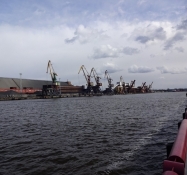 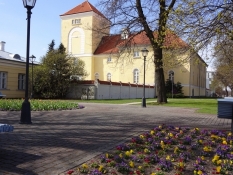 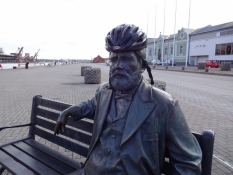 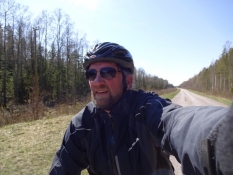 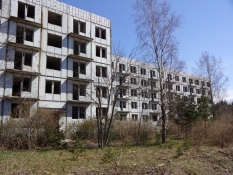 Text message, May, 8, at 17.25: Dear lifeline. I've been to harsh on the Latvian bike roads. In the CITIES they are actually excellent. In Ventspils it was almost Dutch standard. It was indeed a lovely city with many flowers. The city's name means the castle at Venta, which is the river, that has its mouth there and forms a good natural harbour. But I almost did not see any bikes on the splendid paths. In the countryside things are somewhat primitive, but cosy and sloppy in a good sense. I see many storks. Every village has several nests. But the roads ... Gosh! I have planned my stage distances after Danish conditions, I must admit. The kilometre deficit I gathered the day before yesterday is hard paying back, as I'm also bothered with headwind. But in 20 km I'll turn my bicycle to the south for one and a half stage at Cape Kolka, the nothernmost tip of Courland. Out here stand the last Livonian villages, a language which is close to extinction. Livonia was once a power under the German baronial order, who ruled on this side of the Baltic Sea. It has grown beastly cold. My fingers are cold from typing, so you will get no more. To Riga!! Tomorrow! And a much needed rest day on Wednesday. Hugs from Helmuth. 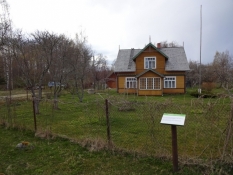 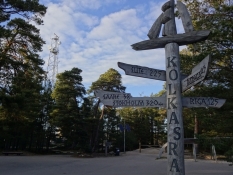 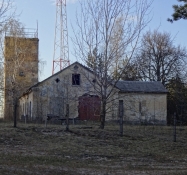 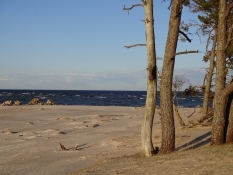 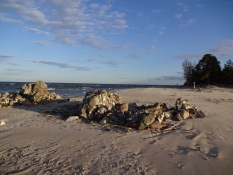 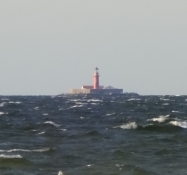 Text message, May, 8, at 20.12. A lifeline PS. I've seen a moose! A female, I guess, as it had no antlers. Unfortunately I did not manage to push the button before she had disappered into the birch wood again. Perhaps she did not want to be photographed without her make-up on. I enjoy a bottle of beer at a restaurant. Normally I don't go much further then. And there's only daylight for another hour or so. But now after Cape Kolka I finally have a tailwind. The 20 km's I can still go today will really increase my chances of reaching Riga tomorrow. Maybe I'll camp in the woods or at a kempings, if I can find one. There are many and they are quite primitive. Bye bye H. 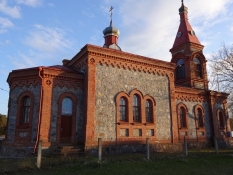 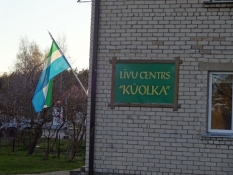 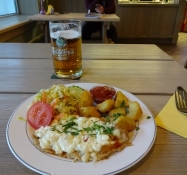