Overcast. Later some heavy showers. In the evening again dry. Chilly at about 17 to 18°C. Very light wind.

In Strasbourg narrow streets in the city centre and bike lanes. In Metz somewhat more exposed to traffic. The Moselle bike route is tarmaced and well signposted. Very muddy trail along Rupt de Mad, then again good medium roads without bike lanes, but also without much traffic. In the end a good trail along the northern shore of Lac de Madine.

Our day contained a train trip of about one and a half hour from Strasbourg to Metz. Accommodation at the campsite Camping des Passons at Heudicourt-sous-les-Côtes.

Apart from Alexander losing his rain jacket in the train to Baden-Baden the train travel day yesterday had passed smoothly. It had started, however, with problems already in Odense back home with a delayed train, but a friendly platform manager of the Danish State Railways solved our problems, when he let us go on the direct train to Hamburg, which I hadn't been able to obtain seating reservations to. Strange, because it turned out half empty and with lots of space to the bikes. Indeed, is was funny too that it was almost secret that it was bound for Hamburg, as it, in the train and on the platform, said that it went only to Padborg, i.e. the Danish/German border. The railway company must know what that is good for, because I don't get it.

But no worries, we made our destination of the day, Strasbourg, safely and slept at The People Hostel. It's a bit expensive, but with a very comfy and large room, situated in a former tobacco factory very near the city centre. We had got up early in Odense, so our evening in Strasbourg wasn't a late one after our dinner at a Lebanese restaurant opposite the hostel. I strolled a short trip down to the river Ill to soak up the holiday feeling. The day after we would have some hours to have a look at the city. 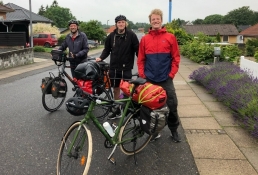 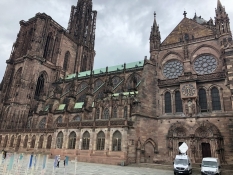 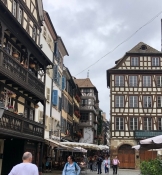 The train to Metz, where our cycling holiday was to begin, was to go only shortly before one o'clock. Alexander, in contrary to me and Simon, had not been in Strasbourg before, so he was allowed to decide, whether we e.g. should cycle out to the European Parliament and the other EU institutions, placed in Strasbourg, or stay in the city centre, where the sights are abundant. So he chose the latter option. And that was a good idea, as the city centre is both splendid and charming with a lot of halftimbered old houses. The most splendid feature is, of course, the cathedral, which we headed for first and parked our bikes on its square. It has a tremendously high steeple on top of a double tower. Simon informed us that in medieval times, when it had been erected, had been the world's highest building, seemingly surpassed only by the Cologne cathedral in the 19th century. It's a Gothic masterpiece, built in light red sand stone from the Vosges with a mighty transept, which makes the ground plan look lide a Latin cross. Unfortunately, we were not allowed to go inside, as a mass was going on, and access apparently was reserved to Catholics. Before converting, we chose to retreat down to Gutenberg square. Here stands a large statue in honour of the inventor of the art of printing. His native town is Mainz in Germany, but he spent long periods of his life in Strasbourg. According to Alexander, the square was disfigured by an oldfashioned children's merry-go-round. I found, it fit well in here, but they could have placed it further away from the statue.

The following sights we had a look at, stood down to the Ill, which forks into several arms. In addition, they have dug several canals, so there's lots of water in Strasbourg. The city had been an important administrative and Christian centre already in medieval times. Today it is the capital of the French region of Grand-Est and the landscape of Alsace. The latter has also belonged to Germany, latest as a part of the so-called Imperial Land Elsass-Lothringen from the French-German war of 1870/71 to the end of World War I. Then the city had been mainly German speaking. Today that language does not help you much, as I learned later.

We ended our sightseeing tour in the, in my regard, most charming of quarters La Petite France,  Little France. It's really neat there with a lot of canals, old manually operated swing bridges and almost only halftimbered houses. Here we also had a kebab (Simon and I) and a bagel (Alexander). Because of the mentioned language challenges (English was no solution either) the ordering turned out diffucult. But I got a (half free) double portion of falafels in return, so I offered Simon a few. He's always capable of eating some more!

Shortly afterwards it was time to bike up to the main station and find the train to Metz. It was already parked at the platform and it was good we boarded it early, as the bicycle compartment was crammed after our arrival. It's indeed free to take your bike with you on the TER trains, and no reservation is needed. Wonderful, France! As a small tribute to France I played the pop hit "Voyage Voyage" by Desireless dating back from the Eighties on my phone in the train, as it pulled out of the station. My sons found this unappropriate. But all of us in the crammed regional train were indeed travelling, and "voyage" means just travel in French and not necessarily sea travel. 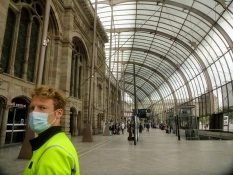 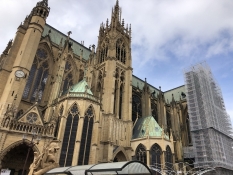 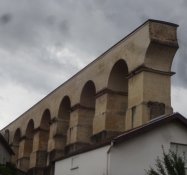 The train rolled through the northern Vosges mountains and stopped frequently on its way. We were on our way out of Alsace and into Lorraine, in German called Lothringen, named after Charlemagnes grandson Lothar, who inherited the middle kingdom between what was to become France on one side and Germany on the other. In Lothar's days his kingdom stretched from the Northsea down to a good length into Italy. The Franc tradition of parting the empire between the sons, who became kings of their own plus obviously a lot of great power's interests made it gradually shrink. Today Lorraine is only a minor part of France, of which Metz is the largest city, but not capital, which is Nancy at the Meurthe, not far away up the Moselle. Metz is situated right down to it.

A fierce thunderstorm was approaching, or we approached it on the train. It looked like a threat of the great deluge, and it was indeed a heavy shower, but before we had re-dressed to our cycle clothes in the railway station toilet and slurped a cup of coffee, on my behalf with a large muffin at Starbucks, the sun was out again. Now that was fine timing.

Metz sounds German, as the French pronounce it "Mess". Don't put too much meaning into that word, but the city's origin is actually a mess. Even in its German Reichsland times it was almost totally French speaking. Thus, it shouldn't belong to this artificial German creation, as the German Empire sought to draw the border to France along the language border, that means as long there were any German speakers left. But the fortress of Metz was too important to let the French have it. As a "quid-pro-quo" the Germans ruled that German was the only allowed language to be spoken in the streets, not even only officially, but også privately! The consequence was, of course, a fierce hatred towards the German Empire and especially the German Emperor, who ruled Reichsland Elsass-Lothringen like his own backgarden. Here in Metz I was certainly not going to speak German, which is, you mind, my second mother tongue.

Well, we didn't stay for long in the city after all. I had planned a short look at it, but my sons were in favour of cycling today's stage of 55 km to Lac de Madine and one of the camp sites there. And they were right, as it was already half past three in the afternoon. So we rolled past the massive cathedral, which nave, as I read, is even higher than Strasbourg's. It's built in yellow stones. Soon we were down at the Mosel river and now followed the cycle route along this river. In our case it was up the river, to the south, as it also has its offspring in the southern Vosges, like the Meuse, the river we were going to follow for the remainder of the cycling holiday. This mountain range is an important European watershed, as its also home to the source of the Saône, which runs to the south and flows into the Rhone and later the Mediterranean, and its source is even further to the north than the ones of Moselle, Sarre and Meuse, which all run to the north and belong to the river system of the Rhine, even if the Meuse, or Mass as it is called in Dutch and German, these days has its own mouth into the North Sea. So much for the river geography of the region.

We were happy to tread our pedals on the fine cycle path, which followed the Moselle closely in large forests, parks and gardens. Now our cycling holiday had got going, but to our dismay the weather was fickle and we had to prove our saying that a bit of water from above is not able to stop us.

Alexander regretted that he had not bolstered his energy reserves better in Strasbourg and Metz, so he got a muesli bar and some chocolate from me. This took place at a very interesting place. Above our heads a high vaulted bridge spanned out into the valley. Well, it wasn't a bridge, we read on a sign, but had been a Roman aquaeduct. In a canal above more than 100 vaults some 2,000 years ago it had carried water across the Moselle valley to Metz, which in Roman times was called Divodurum. It was then the capital of the Gallic tribe Mediomatrici. We were impressed. But time ran and so did the water drops from above, so we soon headed for Arnaville, where we would abandon the Moselle in favour of its tributary, the Rupt de Mad. Mad must stem from Madine, which is flowing out of our goal, the lake Lac de Madine and a tributary to the Rupt. 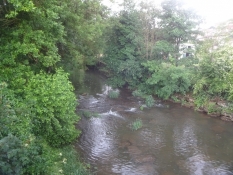 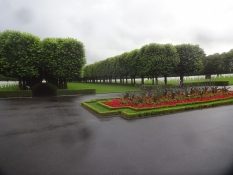 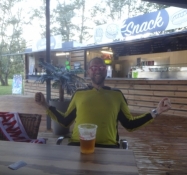