Perfect cycling weather! Sunny all day long, 22 to 24 degrees (slightly warmer than yesterday) and light to moderate, at times fresh wind from West and Northwest. That meant headwind out to the outer levy, and then tailwind all the way to Sofiedal.

The stage was done as planned, exactly without any detours. The beginning of the stage, the tour around Tønder (partly on foot) measured 6 km. 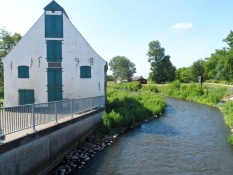 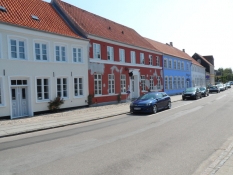 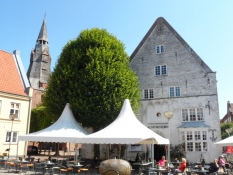 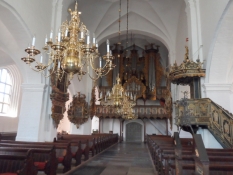 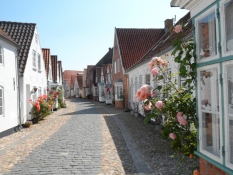 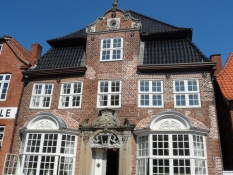 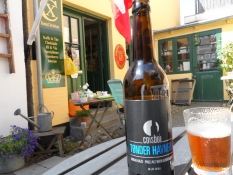 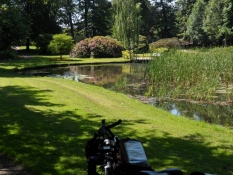 The day at Tønder campsite began with a hearty breakfast at a table-and-bench set outside the well-equipped camping kitchen. It had both a freezer and a refrigerator, so I had chilled my foodstuff. And I had 'pomle' (buns) with butter. Today's program was not that big, so I allowed myself a good rest in the sun on my inflatable mattress after breakfast. I had in fact got up very early, as I could not sleep anymore anyway.

Now I would seek out the places where my grandmother lived in her older age, because I remembered her only being old. It is no exaggeration to say that she was not a good grandmother for my siblings and me, because she did not like children. They behaved noisily and brought disorder into her, for us, perfect seeming everyday life. The last years she lived in Leos Allé No. 8, one of four similar appearing palatial houses in front of which I remember a photograph taken of her. But especially No. 8 had been completely redesigned, as it was now a part of a care center. Back then it was just protected housing only for elderly people. The years before she had lived in No. 2, Schradersvej, only a long stone's throw away. Here she had partly also had my aunt Irma, called Irmi, living with her. She had Down's syndrome and was therefore disabled, why she had been living in psychiatric hospitals in Ribe (Ribelund) and Løgumgårde. The most vivid memories from 'Omi', as we called her, stem form here in the small concrete element semidetached on Schradersvej. Back then it was concrete colored and the interior was a masterpiece of twee petty bourgeois lifestyle with everything you can get in knickknacks. Everything was then incredibly proper, so neither my father and I felt very much at home in the little living room. Daddy always had to work in her garden when he visited her, and innumerable were the visits here. The main attraction was my grandmother's color TV. At home it was only black and white. Now the house was painted in an ugly green color and the box hedges were gone. I heard a young man talking to himself (and his moped, as it turned out) through an open backdoor. I went closer and along the path to No. 4 Here lived a deeply regrettable man named Hjort (pronounced Jååt) as we are always told in every detail by my grandma, what he had been doing. It was so miserably boring, I can recall. Later on Leos Allé there was one 'Frau Bohsen' who comitted a lot of mishaps with unclean toilets and all sorts of gossip. Well, before the reader falls asleep, I will tell you that back in the present day, the young man, called 'Henrik Rasmussen' I could read on the door sign, came out of the backdoor pulling his moped, lamenting the fact that it would not work inspite his numerous attemts to start the engine. He paid no attention to me at all. I thought that if Omi knew there was repaired a moped in her outhouse... Well, it's 30 years since she died. Yet her, Irmi's and my grandfather Andreas' gravesite (who died in 1967, and whom I almost can not remember) was already levelled. I knew that already, so I biked only to the cemetery along Ribe road and stopped at the churchyard gate. Now it was time for a bite of lunch in the form of my packed lunch. It could appropriately be consumed in a parked, known to us as 'e anlech', which I found behind some new houses in Blegen. Into this park we children were often sent when we got bored too much at my grandmother's or too heavily troubled her extremely anxious disposition. I found the playground with new tools and the pond, where I had been playing then. Now I ate my lunch on a bench overlooking the neatly kept 'anlech'. Afterwards it was time to turn my back to Tønder by cycling to Møgeltønder and into the marshland. 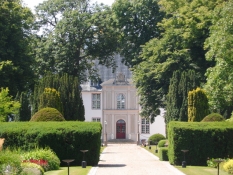 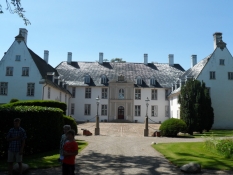 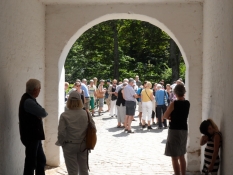 I just rounded the church again into Noerregade and Adelgade and entered Struck's Allé. At the corner of Kongevejen my eyes fell on a music venue, called Hagge's. In my childhood it was a hotel where we had celebrated my aunt Irmi's 50th birthday (I think it was). Struck's Allé was one big road works, which, however, I managed to pass. My plan was to follow cycle route 8 completely to Rudbøl. First stop was Møgeltønder. There was quite a strong headwind. I first took a picture through Schakenborg palace's east gate along the entire axis down to the main building. Previously, it was very overgrown here. On a boardsign I found that there was to be a tour of the palace gardens fifteen minutes later, so I went straight down to the gatehouse, from which it started. About 50 people were already waiting here, but I was lucky and got one of the last tickets. And we all joined in on a rotunda in the garden in front of the castle where our guide, an elderly lady clearly of German descent, told us about the palace's history as Count Schack's  Renaissance palace and its predecessor, a completely demolished medieval castle and about the people's gift to Prince Joachim and Princess Alexandra's wedding in 1995, which consisted of an exterior renovation of the castle as well as a new construction of the palace garden. We stood in the shade, but the roof's black glazed stones glistened in the sun, and everything looked nice and cared for, albeit completely abandoned. In the garden there was more life when gardeners trimmed hedges and looked after the beautiful roses. We went down to the East Gate, where I had been before and saw the big bronze crown and the 'birth trees'. Each of Prince Joachim's children, two with Alexandra and two with Princess Marie, have their own tree, planted when they were born. Soon we were back at the gatehouse and were locked outh through the gate again. 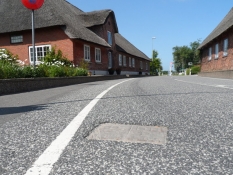 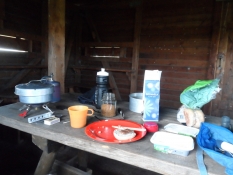 Klar til kaffe i fugleskjulet 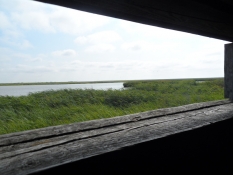 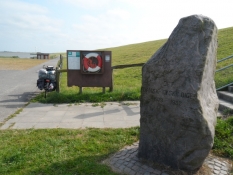 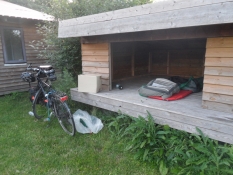 Her sov jeg i shelter 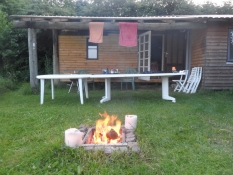 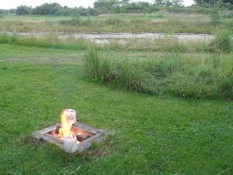 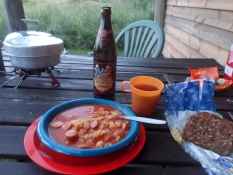 I had called ahead and alerted the owner of the campsite in Sofiedal about my late arrival. At about a quarter past nine I arrived and was wecomed by a woman and her son. They led me right to the back of their compound ground over at stretch of neatly cut grass into a little outdoor paradise with a few wooden huts with a bathroom and a refrigerator, a newly built shelter, and a fireplace overlooking a small lake with a fold with two horses behind. Idyllic'! The shower wasn't working, so I immediately began to boil water to stripwash myself. The towel I used as a wash cloth, and so it worked out quite well. Then I lit a fire using the firewood, I had been shown plus a little more, I found in the bushes behind the shelter. There was also a small cottage called 'mother in law's wagon'. Ha ha. She couldn't sleep any further away from their house. My supper tasted especially tasty that evening: Tomato soup with pasta and Vienna sausage pieces, bread and Salvator. A very small feast with liquorice sweets afterwards. And with the flames of the bonfire as long as I could find more firewood. When it was pitch dark, I went down and 'talked' to the horses. They could drink water in the lake. They seemed to love one another very deeply, and I liked that. Now it was time to hit the hay, and since I had not pitched my tent, it was in the shelter. I had never slept in a such, and I must say I'll not do it so soon again. In the morning it grew awfully cold, and although I crept as far down into my sleeping bag, as I could, I turned cold on the upper body. Perhaps I should have slept at the back instead of the head toward the light. Well, I did not feel I had slept well that night.