Mix of sun and clouds and chilly, 13 to 14°C. Strong westerly winds and thus a strong headwind on the whole stage.

The last morning of the cycling holiday I woke up a little late after a nice quiet night. I felt nothing of the wind in the forest, so I thought it had settled down. In addition to that I wasn't particularly fast at the primitive site without any service. Good, I had everything I needed.

As soon as I came down to the canal path, however, it became clear that it would be a hard last stage to Korsoer to the west-north-west, because just from the corner a strong breeze blew, so not only moderate or fresh, no hard wind. So standing in a parking lot at a tiny airfield just opposite the marina, where I had bathed the evening before, I chose to shorten a few detours without cycling on Naestved-Skaelskoer main road. It is boring and without a bike lane even dangerous because the headwind makes it impossible for one to hear cars approaching from behind. And with a little bit of reeling, it can be life-threatening. No, I wanted to stay down by the coast, where there is an excellent bike route. In the forest before Karrebaeksminde, I refueled at a grill bar. All table-bench sets were barred with mine strip except one. And there was the sign that one must not sit down. I did it anyway and was promptly asked to ease my ass. "Well, so that's how it's supposed to be," I thought, walking back to my bike shoving the rest of the roasted sausage inside me.

Shortly before Karrebaeksminde, I saved a full six km by turning right at the church instead of looking out on Enoe. Then I could have said I had been to another Danish island, otherwise there was probably nothing to see out there. My goal was the small town of Bisserup. Or Fisserup ("pussy town"), as I called it. Then it served better as a goal! There I wanted to buy butter to make sandwiches for lunch, as I had forgotten to buy it the night before. Shortly before Bisserup came a lovely stretch of forest. Both because it really was a lovely newly sprouted beech forest and because there was little shelter from the westerly wind here. Even shorter before the town, the route swung to the very waterside and here I had to shift to the smallest chainwheel to tread my bike. The campsite was my first attempt to buy butter at Bisserup, but the kiosk was not open yet. But there was indeed a supermarket further up the road. I had not expected that, because most Danish small towns and villages are now completely without any function, but here was an exception. At least in the summer halfyear. 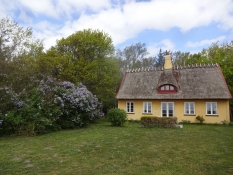 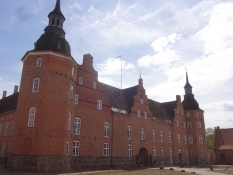 On the manor of Holsteinborg H.C. Andersen was a common guest 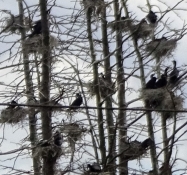 At Brugsen supermarket there was no table, so I hoped I would find one in the castle Holsteinsborg's park shortly after. I was growing really hungry, so I was not happy when I realised that you were not allowed to bring bikes into the park. And I could not really bear to drag panniers and the bag from the grocery store an unknown distance into the park. At Holsteinsborg, they are mightily proud to have been good friends with Odense's famous fellow townsman H.C. Andersen, why he had visited the place many times. It was also the place where the first Danish Christmas tree had been decorated sometime in the 19th century. It came to here from Germany. So I trod a little further until I came to a neglected manor house where the barn provided shelter. There was no table here either, but I made sandwiches and shoveled them inside on a small patch of grass in the sun. Lovely! After lunch, my destination was the town of Skaelskoer. There I would take a coffee break. With the detour out to Borreby castle spared, it was a little shorter. So before long, I was in the center of the jam town. Skaelskoer ("crazy scales") is indeed oddly named. Does it mean crazy fish scales, maybe? Well, you have enough time to think crazy thoughts while cycling, especially when the kilometers grow a little long in the headwind. At first I wanted to turn on the gas cooker down by the harbor, but the wind was too strong, so I lit it just north of town by a big tree in the sun in the hostel park. Ah, how it just feels well deserved when the coffee hits the back of my mouth. On a cycling holiday I always have something sweet and invigorating along with it. Here I also planned to drop Korsoer town, where I had had plans to look at the Fortress down by the naval base. Now I planned to cycle east and north of Korsoe cove. I would be at the station, where the train would bring me home to Odense. So I left the magenta line on the Garmin map and resorted to the paper bike map, folded in the handlebar bag's transparent map pocket. There were a couple of pretty hills, which in turn gave a couple of nice views over Korsoer cove in direction of the town at its western end. I especially remember the trampling up to Taarnborg church. But what a wonderful location for a church. It must be an extra pleasure to step out of it after one's wedding or a little encouragement after a funeral. Now I approached Korsoer station and my week's cycling holiday sang on the last verse. Here I had begun it so I had made a perfect loop of Zealand. I was very pleased to have completed my plans and to have seen and revisited a part of the largest and most important Danish island. It had been out of necessity, I chose it, but that was certainly not how it felt when I sat in the train under the Great Belt and was on my way home to my sweet wife, who had dinner ready for me when I had parked the bike in the garage. And because I had stayed in Denmark and had avoided Sweden, I escaped a fourteen-day quarantine without her. It would have been completely unbearable! But she had indeed threatened to do so.