Cloudy, but in Dresden it was bright. A bit chilly in the evening and a light headwind.

Tarmac bikepath along the river Elbe.

Due to a missed train connection our train trip ends in Dresden in stead of Passau. So we have to make new plans. They mean goin south by bike and train (in the Czech Republic) in order to make it to Český Krumlov on the day we've booket a hotel room there and get back on the planned route. 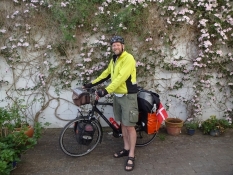 Man and bicycle are ready for two weeks of biking holiday 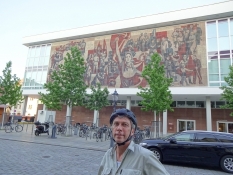 Well arrived in Dresden, Kolya is standing in front of a GDR-style murial painting 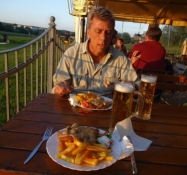 Having supper at an outdoor restaurant down by the riverside

Damn take DSB and their eternal track works. Kolya and I had worked out a train connection from Odense to Passau with shifts in Kolding, Flensburg, Hamburg and Munich to ourselves and our heavily laden touring bikes, but already in Kolding things went wrong when the train to Flensburg went off right before our nose as the one from Odense had arrived there delayed due to track works. We had to wait an hour for the next train to Flensburg and thus did not make it for the ICE train to Munich at Hamburg's main train station. At the information desk here they were very friendly, but unfortunately all the bike reservations to Munich were sold out for the rest of the day and also the next few days. Instead, we were allowed to take our bikes to Dresden on the same day. In that train there was only scarcely room for us, and we are very grateful to the female conductor for letting us go on. I think she understood we were not to blame for the misery and had done what we could to correct it. Kolya had suggested me to try to change our tickets to Dresden. We had planned this cityt as our destination of the cycling holiday, but now it became also the starting point. His idea was to cycle along the Elbe in Germany into the Czech Republic and then take the train south there. It was both cheap and easy, he said. Now it was about getting the best out of your cycling holiday. And the weather promised fine. So we said as Marty Feldman in the movie Frankenstein Junior: "Could be worse. Could be raining!" But were both sad that we would miss Passau, the Danube, the Bohemian Forest and the Lipno water reservoir at the very least. To go there would be a far too ambitious rescheduling plan.

When we arrived in Dresden, it was pretty cool, but the sun was still shining. It was soon time for dinner and darkness, so we would not advance very far today, but at the railway station they informed us in the tourist information that there was a campsite near the Elbe cycle path approx. 15 km towards the Czech border, so that was now our goal of the day. Accordingly, we left Dresden's old town out and found the bike path southbound. This Elbe bikepath is pure luxury for cyclists and very popular, so there were plenty of pedestrians, roller skaters and other good people on it, so we progressed slowly. In addition, the many outdoor restaurants down to the river sent out very nice and wanted smells, so we were easily lured. In Germany you eat much cheaper in restaurants than in Denmark, so they are also very popular, but we soon seated in the setting sun. But we were served large schnitzels with fries and a big Radeberger beer without a long wait. It's a matter of serving a lot of people for the restaurateurs when selling at those prices, but we certainly didn't complain. The only minus was that the temperature was so low that my fingers got cold, so I wanted to cycle further as soon as possible. But I swiftly felt that the bike was improbably heavy to move forward, even though the path was flat as a pancake. A long day of train travel, dinner with two large beers and a light, icy headwind made my body slow. In addition, darkness slowly fell around us, so I was a little nervous about missing a sign and cycling past the campground in the dark. Of course, I had not plotted this one into my GPS, but after a query in another Biergarten, we received the very welcome message that we were close to our destination. In the last light of day we pitched our tents and after a hot bath it was time to slip into the bags. I wondered a while what tomorrow would bring.