The breakfast buffet was very extensive and we enjoyed it.

At quarter to nine our taxi was already waiting in front of the house, the bicycles had also already been taken out of the garage by the hotel owner and stood next to the taxi. We had to remove our front wheels. Then both of the bicycles, the luggage and both of us fitted comfortably into the taxi. At five to nine, we left at the hotel and arrived at Colle the Nava at a quarter to ten. The drive led behind Imperia into a series of tunnels, two of which are neatly long. Shortly after the last tunnel began the heavy climb to the Colle di Nava. Even if the driven road deviates from the cycle route, it became clear that the climb on the bicycles would have been very arduous.

At the Colle di Nava the mounting of the front wheels of the bicycles was done quickly, and the luggage was quickly stowed on the bicycles. At 9:05 am we were already rolling down from the pass on a side road northwards. 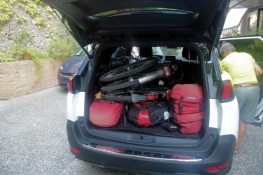 The completely loaded taxi at the hotel in Porto Maurizio

The bikes are re-assembled 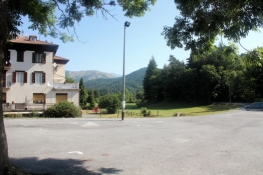 After 2½ kilometers we had to take the road SS28, which now leads steeply down to the Ponte Nava. The average slope is about 3.6%.

In the valley of the Tànaro the slope becomes flatter and we cycled well on the not very busy road downhill. The Tànaro appeared here as a mountain river with lots of boulders in the riverbed. 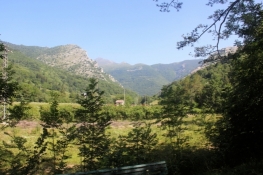 View towards the Tànaro valley 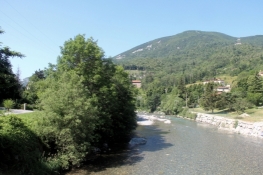 In a suburb of Ormea, we turned off road SS28 to get onto the cycle path on the right bank of the Tànaro. There, the path was closed and we had to go back. We then turned right behind the bridge on the side road and cycled on this through to the village of Ormea. After only a few meters on road SS28 there was the opportunity to change back to the right bank and there we found a neatly asphalted bike path, which led us down the valley on a quiet route.

Cycle path in the Tànaro valley 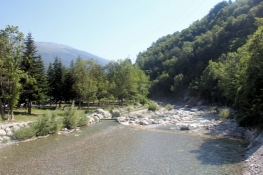 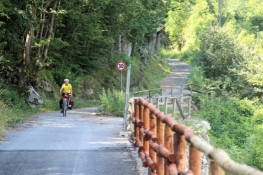 Cycle path in the Tànaro valley

Behind Barchi, the bike path was impassable by a landslide. We therefore had to get back on road SS28. And shortly thereafter on a side road back to the bike path. The bike path winds for about 1½ kilometers up the slope, once even pushing was necessary. Finally, it again went downhill 45 meters of elevation and then little above the river level through the valley. In Garessio this beautiful parallel route ended. But we could continue on side roads down the valley until Pianchiososso. There, the Tànaro had torn the way. Behind the barrier was a huge scree landscape. 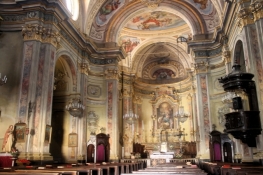 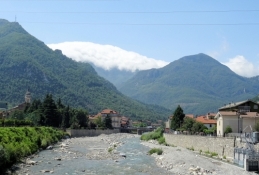 We had to go back a short distance and then continued on road SS28. In Bagnasco then a small detour through the place. And again on road SS28. We stayed there until shortly before Ceva. At the roundabout of San Bernandino we cycled onto a side road, which led us, probably over the old road, to Ceva. Directly in front of the old town center this street led steeply down into the village. Thus we had a great view of the parish church in Ceva and the nested tangle of the roofs of the old town center. Impressive to look at. We cycled through a narrow and shady street with arcades to the church "Collegiata dell'Assunzione della Beata Maria Vergine". Then we turned left out of town and cycled through the 14th-century city gate to the banks of the Tànaro, which we followed for a few 100 meters.

Back on the road SS28, behind the bridge it went uphill and then along road SS28 for about five kilometers. Little to see, not very nice route, but without significant gradients.

From Lesegno we continued on the road SP12. After four kilometers, the silhouette of Niella appeared above the trees. Again two kilometers and a good climb further, to the right above the road was Cigliè with its castello.

After another seven kilometers then Carrù. We had to pedale at 34°C about 80 meters of elevation up to the village. On the right at the entrance of the village we passed the former castle, a little further we came to an impressive large church, the Parrocchia di Maria V. Assunta. 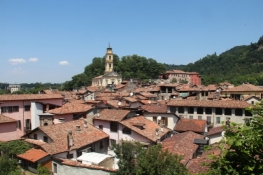 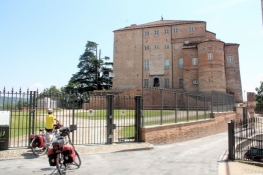 Beyond Carrù we cycled on road SP173, initially heading northwest. It is an intensively agricultural area, especially for us were the hazelnut plantations. Bene Vagienna is the next old and beautiful village. Even from a distance it was beautiful to look at. But even when pushing the bikes through the old town center, there were some nice impressions. 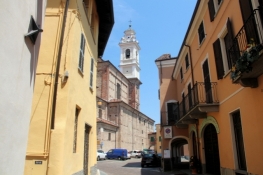 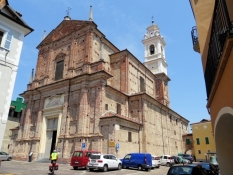 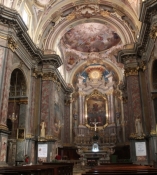 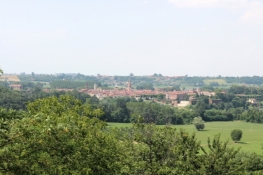 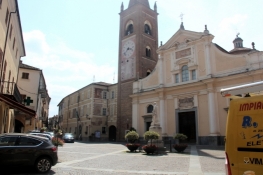 A little further the few remains of the Roman Augusta Bagiennorum, the former capital of the Ligurian Bagienni tribe: an amphitheater and a theater. 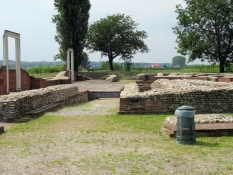 Remains of the Roman Augusta Bagiennorum 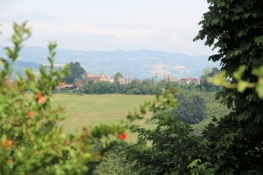 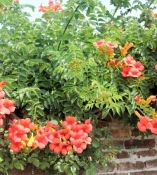 It was not far from here to Cherasco via Narzole.

We had already booked our accommodation in the old fortress town. Worth a visit in the village were in particular the churches. But only a few have their doors open so late in the afternoon. 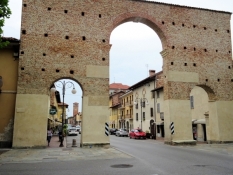 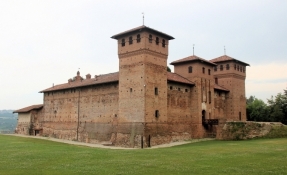 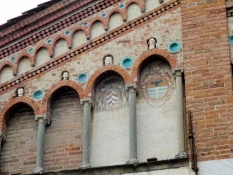 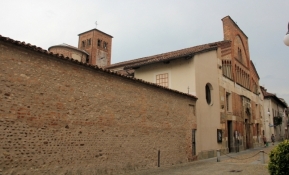 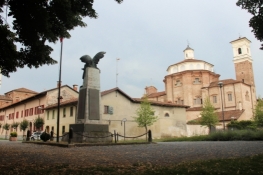 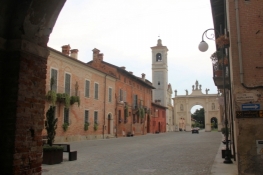