Perfectly sunny weather, warm, but not too hot.

Very short stage along the shore of Lake Constance on a tarmaced bikepath from the camp site into the town of Lindau.

The last day of our cycling holiday. All morning spent on the camp site. After lunch we cycled into Lindau. In the early evening we took the train to Munich with a change at Memmingen. In Munich we went by bike to the hotel garage where the VW Caddy waited for us. The same evening we went by car to Regensburg (on the Donau) and spent the night in our tent on the Azur camp site. The next day we went the long way home via Hof, Halle, Blankenburg, Wernigerode (due to a severe traffic jam near Magdeburg) Brunswick, Hanover and Hamburg. Arrival in Odense in the late evening.

When we woke up, I remembered that the tent stood very tightly packed among other tents on the playground, and maybe it was best to get out and see if everything was peaceful. It was. The children were still mostly asleep peacefully and I went down to the lake to have me my obligatory morning swim. Since nobody was here, I decided to jump in without trunks. I swam pretty far out to see the small island from the other side. When I returned to the tent, Simon was still sleeping, so I woke him up and walked up and bought groceries for breakfast in the store. It was our last day of cycling. In the evening we would take the train to Munich and begin the long journey home to Denmark. But it was clear we had to take another tent accommodation on the way home, because we would only be in Munich in mid evening. It gave us a lot of time today, because the stage to Lindau was only 5 km long, or rather short. Then at the breakfast table we agreed to take our time and only to pack up and ride to Lindau after lunch. So we didn't prepare packed lunches, but went down to the lake to enjoy another swim in the lake. I had assured with camping mummy that it was okay to pack only after lunch. After the bath I borrowed the campsite computer and saw a picture of the kittens that we had got at home. Very cute. Now I thought it might be good to pack the tent and bags together, then we could relax a little more afterwards. And so we did. It had luckily thinned out a bit in the tents on the playground. Then we sat in the TV room for lunch. Afterwards Simon fancied a game of Thurn- und-Taxis more, so we opened some more postal routes in the southern German countries. Unfortunately, Simon better to employ cartwrights and mail-coach drivers, so he won again. Now it was time to say goodbye to the stuffed campsite where vehicles and road trains again held in a long queue to get in. 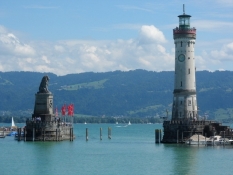 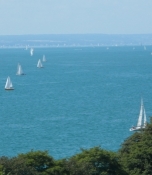 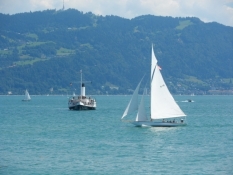 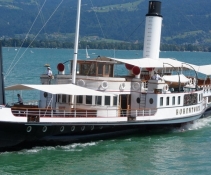 Her sejler den ind i havnen ... 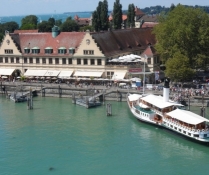 The ride was almost too short, as we rode on a bike path all the way, and we biked along the lakeshore just as we had done alle the way from Bregenz. When we reached the large roundabout at the bridge to Lindau, which old town is situated on an island in Lake Constance, we decided to drive over it instead of going, as the Bodensee-Königsse Cycle Route, which we were on again that crossed the railway bridge. I wanted to make it to the railway station in order to park the bikes there. Then they were ready to get on the train when it was time for that in a few hours. The rest of the time in Lindau we went on foot. Now we were tourists looking for sights of the town. The first one is the harbour entrance, which we had been able to see from the campsite the night before. It is very well known in Germany. On one pier head is a beautiful old lighthouse and on the other a Bavarian lion on a high pedestal. Also the line of beautiful old town houses along the waterfront plus the so-called Mang Tower is a picturesque backdrop for the many boats that every day during the summer season enter the harbour. Simon and I walked out of the west pier and climbed the lighthouse. There were many people in the tower, but I took my time to look at the map of Lake Constance, which was drawn on the walls inside the lighthouse. It is interesting to know, for example, how the Rhine water spreads out into the lake before it runs out of the lake on its way to the North Sea. The observation deck was cramped, and it fit so well that a grand old paddle steamer was about to enter the port. I took a few nice pictures of it, I presume. 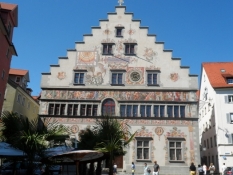 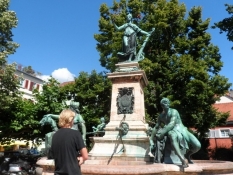 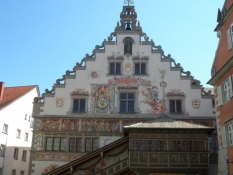 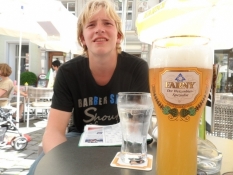 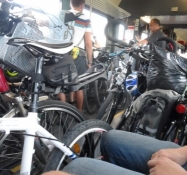 After the walk up to the lighthouse, it was time for a coffee break at a busy kiosk at the pier bottom. It was afler all afternoon now. And we continued our sightseeing in the old town with its lush parks, monuments and beautiful old houses. The town hall is really splendid with its crenellated gable. First we saw it from the front, and then went around it to also admire it from behind. Here an old covered wooden staircase led to the upper storeys. In a shop I found a gift for Simon's older brother Alexander, namely a pair of sunglasses. They looked very cool, and Simon said, his brother lacked a pair of them. Simon had stocked up in Munich, you know. After that we did not really fancy to amble around the town anymore. Well, it was hot in there, and the otherwise very pleasant streets were crowded. Instead, we let ourselves fall into the chairs of a sidewalk cafe in the pedestrian area. Now there was only an hour until the train departed and our cycling holiday was over. The rest was only transport home by train and car. That was not much fun, but on the other hand, it would be great to come home. I was I thinking about that here in the sun on the street, while I enjoyed my last weissbier of the trip. Ah, the weather was too nice to do anything, and it was so comfortable here among the beautiful old houses. There were even not too many people. But we had better get to the station. I predicted that there would be many people on the train too, and it was probably a good idea to get the bikes on board in due time. And it turned out to be so very right. The bicycle compartment, indeed an entire compartment for bikes and their owners, was already half full, but when the regional train chugged across the bridge to the mainland, the compartment was completely stuffed with bicycles. Many factors did, it had to be. Early Sunday evening in high season from a very popular excursion area at sea level in a mountainous area uphill towards the Bavarian capital of Munich. We talked with several who had cycled down in the morning and had spent the day at the lake, and now let themselves transport home. And it was nasty hot. The shift in Memmingen was very chaotic. There were only a few minutes to get all the bikes out of one and into the other train. But thanks for Bavarian relaxedness. The train waited until all the bikes were safely on board, and then a friendly 'grüssgott' sounded from the speakers. Welcome on board the train to Munich. Just relax, The Federal Railservice has everything under control. And so had Simon, I understood from a fellow cyclist who had his bike tangled so thoroughly into another, that they could not be separated without further ado, but then Simon had spent skill or effort or probably both, and as I said it was alle happy ending and we were on the last leg to Munich. I was tired and sweaty and it was even worse to think about the rest of the day and tomorrow. But it was futile. It had been a great great cycling holiday with my son Simon for a whole two weeks. So I suppose we could well endure a bit crowdedness and a long drive home.

In Munich Central Station we got us another doner kebab and rode the short trip out to the hotel garage. Here came the unpleasant surprise that the parking was much more expensive than I had seen on the net and calculated. But there was nothing else to do but to pay and then sort it out at home. It was nine o'clock before we had loaded everything into the Caddy and rolled out on the ring road to the north, which led to the motorway towards Nuremberg. A little later we turned off towards Regensburg, where we spent the night at a campsite right on the Danube. Though it was not passed 11 pm, at which time the boom normally ist shut on German camp sites, we could not be allowed to drive into the site, but had to unload tent and panniers on the bikes and wheel in, where we pitched the tent in pitch darkness except from our bike lights. The next morning I was awakened very early by a crying child. I lay awake long, but still fell asleep again. After that it was not easy to find a bakery, so it was a little unpleasant experience to camp in Regensburg. I had been planning to ride into town to look at a very famous stone bridge, the oldest bridge north of the Alps, it is, as well as the well-maintained medieval town center, but I just did not have the power. Now we had better get home. A tiny trip down the Danube to see Europe's second longest river and tread the famous cycling route had to do. Afterwards we drove north as fast as the Caddy would go. Luckily we listened to the traffic reports which said that there had been a mega pile-up just west of Magdeburg with a 50 km long queue in front of it. So I chose the new dual carriage road (the Germans call it a yellow highway, in contrary to the normal blue ones), called B6n, which leads past Aschersleben and Blankenburg and then on a normal highway to Braunschweig and then along the beaten path to Denmark and Odense.