The Danube-cycle route on gravel into Regensburg city centre. Here I wheeled the bike through the medieval alleys. City road to the train station in order to catch a train back home.

The bike week's sixth and last day, containing a visit to Regensburg and the train journey in totally four trains back home to Odense. 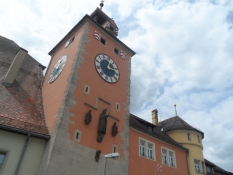 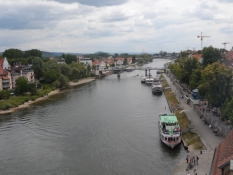 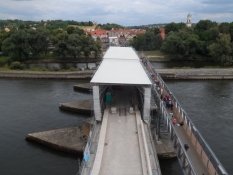 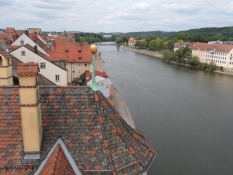 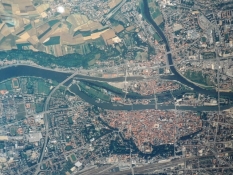 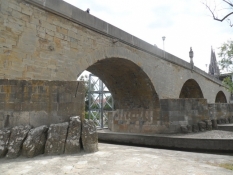 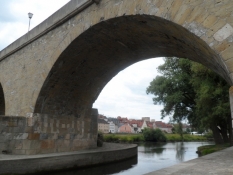 Today I had two plans, to see as much of the city of Regensburg's medieval centre with the stone bridge as possible and then go come with a lot of trains. Cycling was brief today, because it was only 4 km into town. On the way there I passed under a highway bridge, spanning the Danube. It is the latest bridge in a large number of bridges that made that Regensburg a very important city in the Middle Ages. The first in the series was the stone bridge. It is truly unique and nothing less than the oldest stone bridge north of the Alps. Only in Rome, the eternal city, they've got older ones. In addition, it was the first thing I came to in the city centre, so of course I had to look at it carefully. The first impression was somewhat messy, because they are in the process of restoring it with all German thoroughness, so that was covered in scaffolding, blocked off by, for a tourist, annoying obstacles. But there was a special Bridge Museum, which I started to go into, and it was worth every penny. Although it was very cheap. Togehter with the medieval centre, the bridge is included in the UNESCO World Heritage. At the museum, I learned that the city owed its prosperity to the bridge, and I thought that Bad Abbach, where I had been yesterday, had been completely ousted that way. For bridges, especially stone bridges across large rivers were very important and rare at that time. Either there was only a ford ("furt" in German. That ending exists in several German city names of course) or a wooden bridge, which could not bear the heavy weight of e.g. an army tross. And it was the ages of the crusades, so it was needed. But the crossing was to be organized, and people and horses had to be catered for and restied, and thus frequently cities arose near bridges. Dresden and Prague are other good examples of bridge-cities. Although there was a settlement here also before the bridge. In fact, dating back to the Romans, who had built a camp here at the river Regen's expiry into the Danube in 179 AD. They called it Castra Regina. And that became Regensburg in German. The museum was placed in the southern and only surviving bridge tower. Until a short time ago a bridgekeeper had lived in the tower, and at the top some objects from that time were shown. There was also a viewing platform inside the tower where you could open the windows in all four directions, and I took a picture in each direction. To the north, I looked out across the bridge. Also from here so the renovation looked anything but good, but it had become necessary after all the traffic through all the years, right up to 2008, had passed over it, in the end, only buses and taxis. But then it was also necessary with an incredibly long and costly renovation, which first appears to be completed in 2017. And that long I could not wait. But one is allowed to walk over the bridge, and I tried to take pictures, avoiding the barriers. It has a total of 16 arches, one of which is not visible anymore. To protect the bridge and also because the ships on the Danube eventually had trouble passing it, they constructed a canal north of town where all the barges now go. Already there is a northern arm of the Danube, so there is an island, Jahn-island out in the middle of the river, so now there are three waterways here. Today only excursion boats are allowed to pass the bridge, and they can not move further up the Danube, so they have to turn back shortly after. 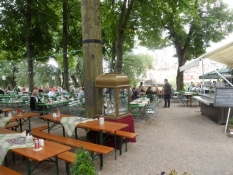 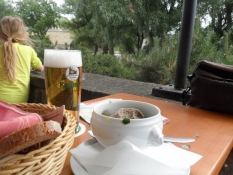 I went out on the island and saw a beer garden on it. There was built a pedestrian ramp down the island, not very beautiful, but practical, and certainly the publican at restaurant Alte Linde was happy with it. This joint was so beautifully positioned with a view terrace under the trees overlooking the bridge and the old town on the opposite bank. I let myself be lured by its location, and could well do with a beer and some lunch. I lurched towards the wall down to the river where a table just became available when I came along. It was quickly filled up with more people, as it is quite normal in southern Germany to move along and sit at the same table with foreigners. I had of course also benefited from that tradition at Kottingwörth a few days ago, and frankly I think its cool. We stick too much to ourselves up in the cold north, in my opinion. So I had company for my weissbier and leberknödel-soup, a leek soup with a sort of big meatball in it that was hard to eat with a spoon. A soup for knife and fork, it was. But it tasted good and the view and the company were fine. At one point a little girl jumped up on the wall. She had painted the German flag in her cute little face and had a German football t-shirt. I don't know why, but I was really happe to see it. The Germans have grown happy with their country thanks to football. Patriotism had been a major problem for the Germans throughout my childhood, but now Germans manage to be happy for their country. Hello, this sounds like a total banality, but believe me it is not. Rather, it is a painful process from the total humiliation in World War II and a strange displacement of the devastating Nazi period subsequent to a deep recognition of the terrible crimes that had been committed in the German name and then the recognition that it was over, and that modern Germany, especially after the division of the country had been overcome, was a country to be proud of, when you're German. It came very strongly to the fore in 2006 when Germany hosted the World Cup, and it is still vibrant. And what is particularly gratifying, is that, except for some fools, which of course exist everywhere, no true nationalism seem to be mixed up in the pride. After all it is not the German army, the Bundeswehr, they are proud of, but a football army that attacks on a lawn with its feet and heads. And which a little girl on a wall is a perfect ambassador for. Yes, I was quite touched by it, and sat for a long time, too long if I wanted to look at the city before the train going up north, and enjoyed the scenery. The birds hopped around in the bushes under the wall, and the atmosphere was so relaxed and beautiful that the city centre on the other side of the river had difficulties in luring me off the ground. When it finally succeeded, I first went for a walk down under the bridge. Here a few bows stood without scaffolding, so it was good to be there. But then I crossed the bridge and finally left it to dive into the tangle of medieval streets in Regensburg city centre. 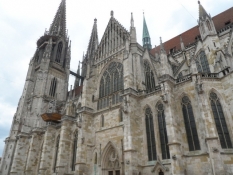 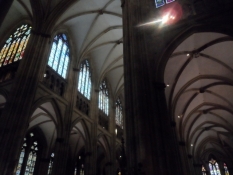 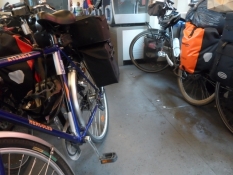