Sunny and fairly hot the whole day, 26-27°C. Light southerly wind, which increases to a moderate headwind in the afternoon. 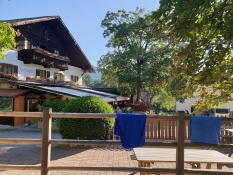 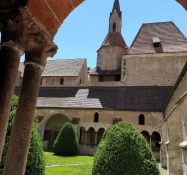 The fourth stage had Southern Tyrolia's capital of Bolzano as its goal. First stop of the stage was at Bressanone, where our first task was finding grease for Thomas' brakes. Alas, so far, it wasn't to be. Instead we enjoyed our sandwiches on the market square and a peak into the city's impressing cathedral with a beautiful abbey yard.

Our coffee break we made at Chiusa, a charming litlle Alpine village. It made a far more Austrian than Italian impressiion on me. After the coffee we enjoyed a steady downhill going, which made Alexander and Simon shift into a high speed mode, which was only stopped shortly before Bolzano. It had grown terribly hot, which made me shed my clothes and submerge my overheated body into the river Isarco.

In Bolzano we first cast a glance on the historic centre with the main square, which is decorated with a statue of the local, but still important German-language poet Walter von der Vogelweide and the large cathedral, which roof reminded me of the Stephan cathedral of Vienna. We also delighted ourselves with a chill wheat beer on the square.

The campsite was crammed, so Thomas and I just found room for our tents, while Alexander and Simon, who were shopping for dinner in the vicinity, almost had to use magic in order to make their tents squeeze in. This tentsite was obviously underproportioned! Luckily, a swim in the pool, followed by A&S's superb risotto turned everything to the good. Until we bunked, as I slept very poorly due to the intolerable heat ind the tent during the night. 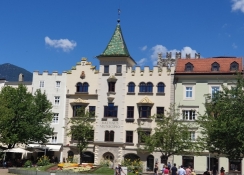 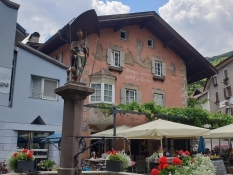 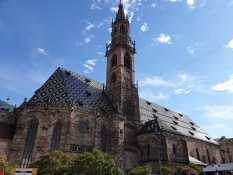