They had forecasted rainy weather, but it stayed dry almost all day, except for a few drops. However, it was overcast and chilly, about 18 to 19°C. Slightly more windy fra south and west, so still tailwind.

Superb bike path along the Meuse from Namur to Huy, lavishly signposted. The tarmac a bit more worn down, but still fine. In Huy, we cycle in the pedestrian areas, which is strictly forbidden in Denmark, but in Belgium it's fine. After Huy and its wall (with its vertical tarmac, as it felt!) the route turned cumbersome, when we were led away from the path because of deviations. Especially the suburbs of Liège felt annoying with heavy traffic, rude cardrivers and ugly buildings. And we made a hopeless detour out a canal. But everything well signposted, so we did right. And it's just a periodic nuisance. In the city centre of Liège again splendid bike paths through parks along the river, sometimes arranged on bridges and a path hanging above the water out from the quayside. They love their bikes in Belgium. And they're supposed to be going!

The deviations from the planned route are due to closed sections of the path because of road works on it. I repeat: The signposting of the route does not get slightly poorer, as it's a temporary solution! Such a thing you see only in Holland or Belgium! 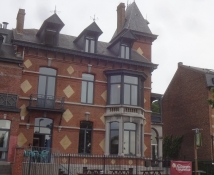 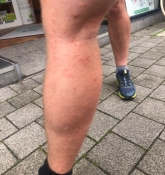 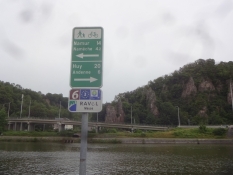 In the morning at our hostel began we noticed that Simon in particular was hit by an ugly rash on his legs. No one knew where it came from. Both boys were hit, I didn't have any problems. Buying an ointment at a pharmacy and applying it immediately on the day's stage to Liège healed it quickly. In Namur Meuse swings in a northeasterly direction, and now the path was fine-fine again. Again, Alexander and Simon set too high a pace for me. But in Huy, the peloton was gathered again. On the magnificent square in the middle of the town, we made sanwiches after shopping in a hypermarket. We needed extra strength now, because we planned to pedal our bikes up the legendary Mur de Huy hill. Beforehand, we put all the luggage in a shrubbery in a small square at the foot of the hill. And then all three boys found their lowest gear and trod into the pedals. Alexander won our small race superbly, although his first gear is somewhat higher than mine. But he can produce a lot of watts, that boy. The increase is 19\% on average, up to 26\% at the inner edge of the turns. Simon helped himself by driving Zig-Zag. While I took a breather halfway up. The hill is traditionally done several times in the one-day classic Fléche Wallonne, "the Walloon arrow". Downward we chose another way in order not to torpedo other bicycle desperados on the way up. Then we mounted all our bags again and went on along the Meuse towards Liège.

First we cycled around the huge nuclear power plant in Huy's suburb of Tihange. It is notorious for cracks in the reactor building. Something especially the Germans are lorn facing. But they own several outdated nuclear power plants that they keep running. The bike path was in good shape. Still, they had arranged several tricky detours, always on the opposite riverbank. On one of them we held a deserved coffee break at a table-bench set in a residential area. After Namur, the Meuse Valley is more or less populated all the way. And the buildings do get uglier and uglier. Liège's suburbs in particular are hideous. The bottom, for my part, was reached in a gloomy suburb, where I was given a shitball by a female driver because I didn't know my French after she meant I had violated my right of way. Another miserable experience was a long stretch in the wrong direction along a canal. Liège is Wallonia's largest and Belgium's third largest city, and the center looked differently chic. The cycling comfort was top notch. A longer stretch of the path was hanging above the river and fixed to the quay, and the traffic lights were smartly made for cyclists. In this way we quickly reached our hostel, which is located in the middle of an island between two Meuse arms. Outremeuse is called it. Accommodation arranged, I was in charge of dinner in the hostel's courtyard, where I cooked chicken Tikka-Masala after two trips to the nearby supermarket. At dusk we walked up to the fortress by way of the very long staircase, (also) used meditatively by the inhabitants, so it is unwelcome to shout or speak out loud. The view was beautiful from up there, even though it had grown dark. For the same reason, we chose the same way down and not a narrow, unenlightened, twisted path I had planned to walk. 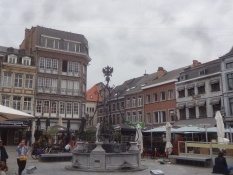 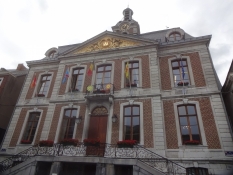 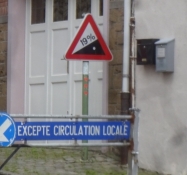 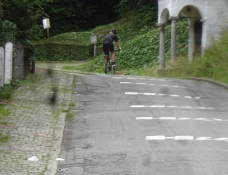 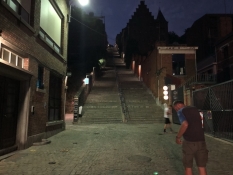 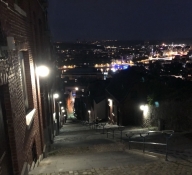