Sunny, partly cloudy in the afternoon.

The exit from Avignon to the south worked again without problems. After about six kilometers we arrived on a quiet side road and cycled southeast towards Châteaurenard. Irrigation canals often run alongside the road. Vegetables and fruits are grown in this area. The road was often shaded by trees.

In Châteaurenard we visited the church Saint-Denys. An unusual feature of the simply furnished Romanesque church is the sloping floor of the church.

Through the old town streets we cycled southwards out of the city. After crossing road D571 we were back on a quiet side road. On both sides of the road again fruit and vegetable cultivation. It stayed that way until shortly before Saint-Rémy. 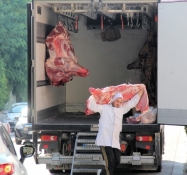 Châteaurenard, a butcher gets his meat delivered 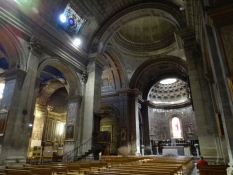 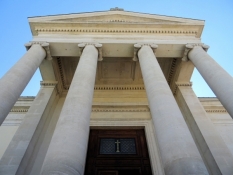 In Saint-Rémy, the Grand Marché Provençal took place. From Rue Carnot to Collégiale Saint-Martin and to the end of Rue Lafayette, there was one market stall next to the other and hundreds of people in between. With the bicycles much attention was needed to maneuver through the crowd. Therefore, we did not notice much of the offers of the market stalls.

On the road along the old town center we then cycled north, crossed road D99 through the underpass and were on the EuroVelo 8. From here, the bike path to the Durance Bridge in Cavaillon was signposted as a temporary EV8. 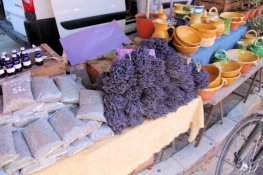 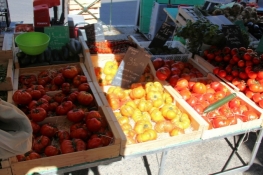 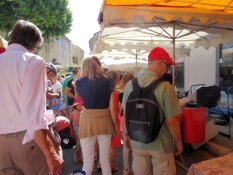 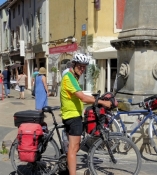 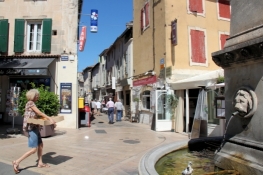 The first kilometer of the bike path runs next to road D99, then almost two kilometers as a well-developed bike path parallel to the side road to La Galine. From there then on almost traffic-free side roads through the area north of road D99. The route took us through the flat landscape, provided insights into the complex irrigation system, and ran through the town of Mollèges, which offers shops, restaurants and snack bars. There is no reason to rebuild the route along road D99.

On a well-developed bike path, we came well across the Durance on the last stretch before Cavaillon. Then signposting and bike path ended. 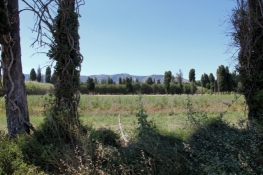 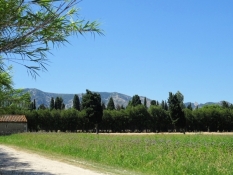 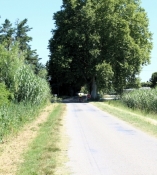 Between Saint-Rémy and Cavaillon 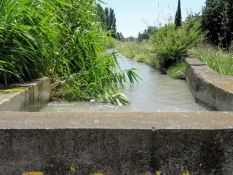 We cycled the southern variant through Cavaillon, which means pretty much in an easterly direction. Through a small underpass we passed below the railway. We turned to the left and therefore had to cross twice the railway tracks of the disused railway line.

Beyond road D973 begins the signage of the "Autour du Luberon à Vélo", which can be followed until Robion. The first interesting place on this piece is Taillades. At the southern tip of the village is its old nucleus. A quarry has been used in such a way that the stones left became a fortification. Fortress tower, church Saint-Trophime, as well as some houses from this time are preserved. 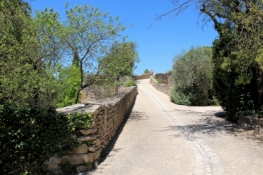 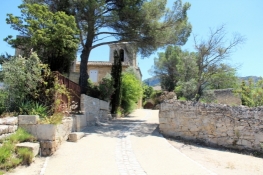 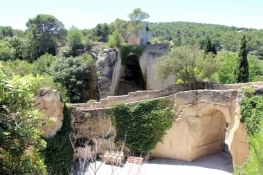 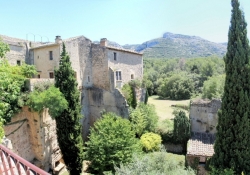 On the way to Robion there were some steep climbs. Through the village itself, we rolled through without sightseeing. 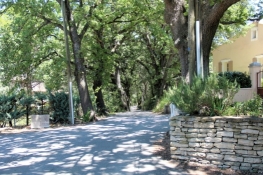 Near Robion in the Luberon 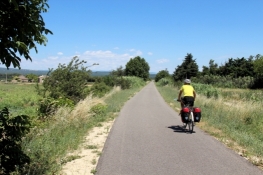 At the former station of Robion begins the developed bike path. The bike path is signposted up to our current destination Apt with the EuroVelo 8 logo and a supplementary logo "Calavon Vaucluse à Vélo".

The route is paved with asphalt a good two meters wide. A few meters above the surrounding ground level we had a good overview of the fields on both sides of the route. Occasionally, the bike path is also off the former rail track, but is always good to cycle and without significant gradients. 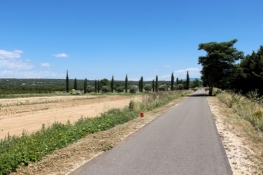 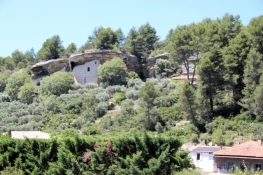 House built into a rock in Beaumettes

Landscape in the north of the Luberon

Ten kilometers before Apt we came to the bridge Pont Julien, which already has been part of the Roman road Via Domitia. It has been used for car traffic until 2005. 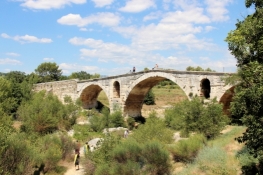 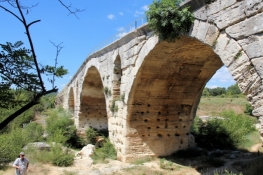 At the end in Apt we had to cycle uphill strongly. Our Chambres d'Hôtes is located about 70 meters above the old town on the southern slope. But we had a magnificent view over the valley and the mountains in the north from the terrace in front of our room.

View from the terrace of our Chambre dʹHôtes in Apt 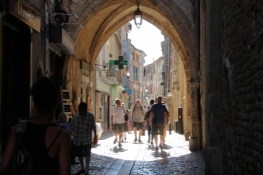 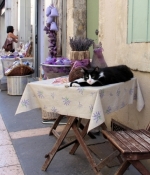 A cat is chilling in the alley 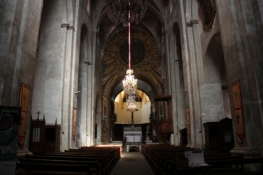