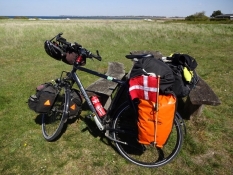 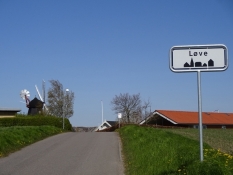 FB post May, 1 at 12.18 from Froelunde Fed after approx. 10 km: Hi Friends. So I've left my home towards Grense Jakobselv, where I hope to arrive in 49 days. And towards Ejby at Ise fiord, where I plan to pitch my tent for the first night of the trip at a naturist campsite. The weather does probably not allow to run around naked, but the sun is shining and a brisk wind is blowing from the east, so I will be exercised well today on the remaining 75 km. It was a somewhat awkward feeling to say goodbye to my loved Susanne❤ this morning and leave my happy home. The train took me from Odense to Korsoer and now I am on Froelunde Fed. Well begun ... is not half finished, as I have still some 3870 km in front of me! Best regards H

Well, that’s how I put it quite bluntly without any idea of what lay ahead of me. It sounds like I was going to explore Africa in order to fill the white spots on the map. But for me, the cycling holiday was indeed going to be a discovery trip, as I know now 3,885 km and two months later. But the huge distance is divided into many days and stages, respectively 49 and 42, so this report will fill a bit. As I’m so full of impressions and experiences that urge to run through my fingers and into the computer keyboard. Let me put it this way: I hope I get it all along. Because there is a lot. But it was also a very long bike ride. Fortunately, I have the "frame" for my travel description already in the form of my facebook updates I sent home, as well as the text messages to my follower’s group, when I did not have wi-fi and could write on fb. Those words I wrote 'in situ', ie on the spot with cold fingers and often high on emotions of the particular moment and place. And they are valuable today, when I again sleep in my own bed, eat my dear wife's good food and just cycle to work and back like many others. I hope you, who read this, like to keep reading. That it is readable to many in the long run. Therefore, I will try to avoid nerding in special areas, even though cycling itself, historical sites and random people I met and their opinions fill a lot. But that is what I'm interested in, and so the description is characterized by those things.

Well, for the time being, the task was to get over Zealand to Solbakken camping by the Ise fiord. A task in itself in the brisk easterly wind, I was offered on the Iron Curtain opening day. It was hard labour up the hills and even down them when the wind was straight ahead. But the sun and the deep blue sky were a pleasure. Along with a single place name. Løve (Means ‘lion in Danish). Haaa. Maybe I was indeed in Africa?

Out of Africa, so to speak, In Dianalund, the time had come for the first coffee break of the bicycle holiday, which I always have in the late afternoon, as coffee with some cake’ish thing is good fuel for the muscles. Along with black bread on the bread engine. Today I had my packed lunch at Frølunde Fed after the fb update. In Dianalund I found a cafe in the mall. It was nice to go inside on this very windy day instead of making coffee in nature of the gas cooker as I normally do. But today I needed some shelter. Via Stenlille I reached St. Merløse. Here the wind was very strong in the open landscape. The last seven kilometers took time, because I can only power all the miles I've put in front of me if I gear down and go my own slow, grinding pace. Then I’ll make it. The question is just when. Today it was at 8 pm. After a grocery shopping in St. Merloese to make dinner in the campsite's kitchen I turned to the north, so now there was only sidewind, which even settled. But a good hill down to and especially up from Tadre Mill had to be negotiated. On the other hand, it was amazingly beautiful there. I wonder if the people who live in the mill know that they live in an unusually beautiful place in Denmark? Beautiful is also Bramsnaes, a little peninsula that jetties out into the Ise fiord at the very bottom of it. Especially it's known as a paradise for pleasure sailors. Now I was close to my goal. The last part after Ejby was on a gravel road, then I stood in front of the naturist campsite Solbakkens reception cabin. It was abandoned, but a phone call made camping mama emerge from her caravan. She was fully dressed, but the weather was in fact quite chillyl and still windy. But she said that the guests had sunbathed naked in their awnings today. As it was May, 1st, it officially was the first day they were open, but they had made a false start this weekend. I was led to a lovely tent spot overlooking the fjord on the cliff and not far from the public house with the kitchen. The best part was the brand new sanitary building with sauna. I would like to find warmth there before my supper. When my tent was pitched, dinner was my first wish. I took it in a nice party room. So I had my own little party with spaghetti bolognese and a Paulaner beer. It was my first night of a month and a half of a bike holiday, so the freedom felt great and present there in the empty bar. Before my supper I acted naturist in the sauna. Everything was brand new and shiny. A woman opened the door while I warmed my cold bones in the sauna. Fine, I thought, but her only errand was to check if I was a camper and did not cheat on the heat. She was dressed as well, so all in all she was a disappointment to me. But it was nice to creep into the sleeping bag with a warm body and full stomach and think about I was on my way on my long trip north. The wind shook my tent a bit, but I slept well all night long. 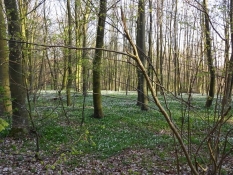 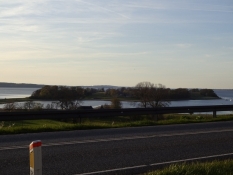 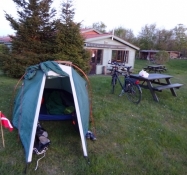 FB-post, May, 1, 23.05: Good evening, dear friends. The first stage of my Iron Curtain Tour is ridden, 87 km in a strong headwind. But very sunny. My bike runs well and my legs were good today. But I do hope for less wind tomorrow. My tent is pitched a beautiful place on a cliff above the Ise fiord on this stylish camp site. I even was in the sauna! And then I prepared a big meal of pasta with meatsauce with an oktoberfest beer along. Delicious!

I've on my four-day introduction on the way to the Iron Curtain, which I'll hit in Klaipeda in Lithuania. I go there by ship from Karlshamn, Sweden. This country I'll hit tomorrow, where I intend to pitch my tent in a forest near a lake. Now I have to do the dishes. And then into the sleeping bag. Good night and sleep well all of you. Hugs H 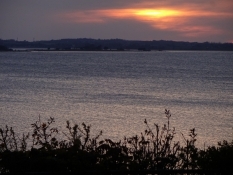