Morning and early afternoon quite warm (18 to 19°C) and sunny with light westerly winds, however at about 4pm the wind turned to Northwest and increased to a moderate to brisk breeze, it became overcast and temperatures dropped to about 13 to 14°C.

My night rest had been rather uneasy, for no other reason that it takes a night to get used to lying hard and uncomfortable on a self-inflating mat and resting one's old head not as high and soft as at home. It takes one night and then I sleep well. No exception this time, but at the latest during my morning dip trip in lovely warm sunshine, all discomfort was forgotten. In the motorhomes, they were also awake, but took no notice of me, so I had a skinny dip like I prefer. In fact, I would not need my bathing trunks before the very last evening bath at Naestved marina. Cool! The day looked bright and easy like the previous one, and the wind blew lightly to moderately from the south and west, so it was optimal. Only the weather forecast I had seen at home promised cold and brisk to hard northerly winds later in the day, so with this little treat I ventured on into the Zealand landscape. 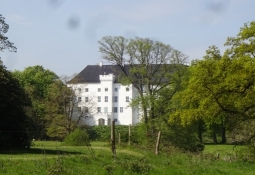 The manor of Dragsholm is situated in a woodlike park 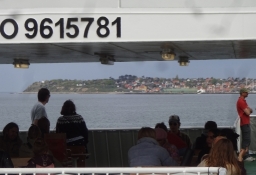 Lovely gravel path along the sea through Tisvilde woodland

For the time being, however, the bike ride was easy and comfortable on small, almost car-less tarmac roads around the small town of Havnsoe and along the beach at Sanddobberne. After a very short distance along the heavily crowded highway between Kalundborg and Nykøbing Sj. without bike lane, a nice, bumpy dirt path passed Dragsholm castle, which seemed pretty peaceful during this corona crisis. Without it, there would surely have been many people here on this beautiful Sunday morning. Spring was at its peak with its lush green color and many wild and cultivated flowers. In the castle park that soon turned into an old natural forest, I saw large rhododendron bushes in bloom. So I just had to produce my camera. A moment of extraordinary beauty. I was almost expecting a crane to slide regally across the meadow. Or a naked, young woman. But none of this happened.

Soon after, I cycled across the dammed Lammefjord on a lithe and completely flat, paved tarmac road. My Garmin noted my height as two metres below sea level, so it was right. This was old fjord floor in one of Denmark's largest dams and breeding ground for the famous Lammefiord carrots. But I saw only corn fields. In the town of Asnaes flatness was over, and the terrain rose some 70 meters in a few kilometers. I felt sizzlingly hot as I climbed up an ancient burial mound to catch my breath and quaff water by the litre. The peninsula of Odsherred is by nature's hand created very hilly. So I went up and down and up again to Northern Asmindrup, where I produced my lunch box at the church. At a rickety table-bench set, I swallowed its content and rinsed well. Afterwards I went downhill a bit too fast when I missed my planned route to Nykoebing Sj. and had to make a  detour down to the Isefiord. Unwise, because it made me five minutes late for the ferry departure at 2 am to Hundested at Roervig harbour. There was one hour to the next one, which I spent cycling out to Skansehage in order to cool down in the fiord. Out there, I noticed the sky change from light blue with white tufts to lead grey with even darker clouds in it. The "promised" weather change was underway. The wind also freshened from the north, the temperature dropped and I wrapped my bare legs and arms. In Hundested I lhad a look at the redoubt. One of the many from the Napoleonic Wars when Denmark had bet on the wrong horse and thus gained the English as an enemy. Britannia rule the waves, so for a country with as much coastline as Denmark, coastal defense was essential. Here in Hundested they had left the cannons on the bastions. Afterwards, I cooked coffee in the desiccated moat in shelter of the rampart, because the gas cooker requires good shelter. After the coffee break, I found that it was a quarter past four with over 30 km left in a fresh side headwind, which was nevertheless mitigated by the many forests I cycled through. The surface, namely a lot of uneven dirt roads and the many short but steep climbs, often in combination, made my progress slow. More than ten kilometers per hour on average could not be achieved. Including a few rest stops and a walk down to the beach at Staengehus. This was Melby common, and I have memories of my days as a soldier, when it was a military training area. Here we threw, among other things, with sharp hand grenades. My seniors and comrades felt very insecure, when it was my turn to throw, because I was a notoriously bad pitcher. I was close to wetting myself of horror in that winter of 1981/82, but everyone survived. And there was the Melby camp with its red wooden barracks, which apparently had not survived, not because of my hand grenade, because the army was cut down after the end of the Cold War. In those days the camp had been the scene of my only military interrogation exercise in which I participated as a prisoner of war. In all my later experiences of the kind, I sat on the right side of the bright light. But, of course, we had to know how it felt to be exposed to what interrogation officers were allowed to subject prisoners of war to, real or simulated, under the rules of the Geneva Convention, so we had to have a taste of it ourselves. It was a very unpleasant experience, and I was confirmed what I knew well in advance: I am not at all suited to the craft of war. After the open Melby common, Tisvilde thicket followed and then an almost endless series of fashionable seaside resorts with large villas in huge gardens and cottage areas off the Kattegat coast. Gradually I grew tired and longed to reach Gilleleje and Nakkehoved tent site. 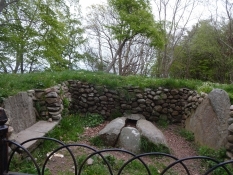 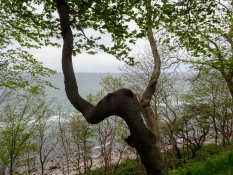 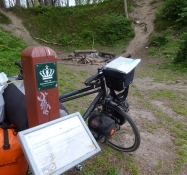 Finally arrived on Nakkehoved primitive tent site next to the sea

Shortly before Raageleje, my tank was empty and I had to refill calories in the form of muesli with milk. The wind was shaking me at the picnic area and there was some rain in it, so it was anything but nice. But my engine needed fuel. I dropped the rest of the north coast route No 47's detours and stayed on the road to Gilleleje. Soon I had passed the northernmost point of Zealand Gilbjerg head and had now cross winds. And I immediately spotted a Fakta supermarket in Gilleleje so I could shop to manage at the tent site. Now I only needed water that a friendly man advised me to fill up at the harbour. Of course I could have bought something, but otherwise public toilets with water were locked off because of COVID-19. I need some three liters for washing myself, doing the dishes and for drinking when there is no water tap like at Nakkehoved tent site. Soon the two lighthouses emerged, the new tall western one and the old, low eastern one. Nakkehoved ("Neck head") is the start of the entrance to the Sound with Kullen lighthouse on the opposite side. That lighthouses were important to navigation in the historically prominent waters, many things show. Among others that lighthouse inspectors were very reputable people because of their great responsibilities. Here at Nakkehoved, a certain lighthouse inspector Christian Faber had been allowed to set up his own tombstone in a Bronze Age mound. His interest in archeology evidently made him want to rest in peace out there near the lighthouse and the cliff above the sea. Now I was a few hundred yards from the campsite, which lay in a hollow in the woods almost completely sheltered from the wind. I was happy about that, because I had had enough wind by now. There was also a great view of the sea, where I wanted to go now in order to wash myself. It turned out rather awkward, because I had to climb over large stones and undress my bicycle clothes in the fresh breeze. The waves were big and tried to toss me around, so it was a difficult exercise. And cold it was too, so my motoric skills were challenged. During my dressing, a plastic bag flew away, which I afterwards had to find and collect, because I do not pollute nature with plastic. That is as firm a principle as never to slip dirty into my sleeping bag. At the tent site I had a lovely evening with self-made food on the gas boiler and a bonfire with beer and music from the smartphone to. A song I always listen to at those occasions is "Where do you think you're going" with Dire Straits. (1979) I had a fine evening at the fire while darkness fell. Above the hollow there was a trail where a few people came by and looked down at me. I love the wilderness feeling in nature. And the weather was not at all bad as long I was well dressed and in shelter. I was lucky it didn't rain.