In the morning cloudy, but from midday beautiful weather the remainder of the day. Chilly, about 10 to 11°C, and light to moderate westerly winds, that increase to a brisk breeze in the evening.

The two girls were still lying dormant in their sleeping bags as I started rattling with pots and pans for my breakfast so I tried to be quiet. When life had reoccured to them while I was packing, they said that my one bicycle bag with food, which stood in the shelter, had been visited by mice at night. I apologized many times for not having my bag closed properly. And then I heard a strange phrase from one of the girls' mouths: "Sorry, we were not able to protect your food any better.". So supposedly it had been their duty, while trying to find sleep in the cold night, to secure my food from rodent attacks. Well, honestly! My answer was that it had been my fault not to close my bag properly and apoligized likewise. In addition I praised them for their toughness to go out into the woods, light a bonfire with an unknown middle-aged man, and sleep out there. Plus even cook delicious food from scratch. They were cool girls.

My plan was to circumvent Koege bay today. That does not sound very ambitious, but following the bike route it still made a handsome distance. I first cycled across Western Amager along a new, shorter route, up to the motorway bridge across the strait of Kalveboderne and past the industrial area Avedoere Holme. Here, the Oersted power plant's chimneys protrudes well. Oersted is the new name for DONG, Danish Oil and Natural Gas, and that company had recently been in the media spotlight, because it, among other things, uses American wood chips and even possibly wood from the Brazilian Amazon rainforest as fuel in the power plant. Absolutely impossible in these times of climate change. In my opinion, in them humanity faces an absolutely enourmous challenge. However, right now it appartently is much more afraid of the new coronavirus. Which is a bit strange, as the shattered climate on Earth is going to cost a number of lives, incredibly bigger than the contagious virus that had attracted so much attention and which politicians were willing to let our economies pay huge sums for. This money we'll all be paying for, because who else should? The rich people in North Zealand? I don't think so!

In Broendby harbour, I refueled my water bottle and got rid of my waste from the Pinse forest. Next the cycle route  followed Koege Bay Beach Park, a huge nature and leisure area on and behind the dune range with the lagoons behind. Hundige beach has a nudist beach, which has an interesting name: Schweinchen beach. Here, a lot of hot activity forbidden for children goes on, when the weather is right, but today it was too cold for outdoor sex. Soon after, I cycled on the old main road between Copenhagen and Koege on a nice bike path. Here the coast seems to be built  up all the way. In particular, the supply of fast food restaurants is striking. But I did not want to stay out here in this artificial landscape and followed cycle route 9 into the real village idyll of the hinterland. First I entered Karlslunde with a lunch break at the church and the rectory. Sunshine, birdsong and a sandwiches out of the box instead of cars and the smell of french fries. Then followed Karlstrup, Solroed and Jersie. At Litlle Skensved I shopped at Brugsen and left the bike route for a short while. It makes a peculiar detour, which even goes up a hill, fittingly enough in the village of Hoejelse ("Highish"). I could do without it. Now I was close to Koege. A town that would cost me several hours of the day. Not entirely in vain. 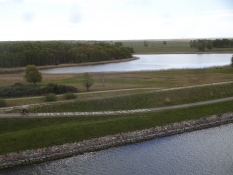 The nature reserve of Vestamager as seen from the motorway bridge 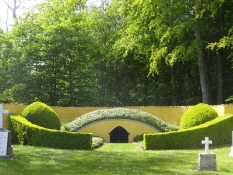 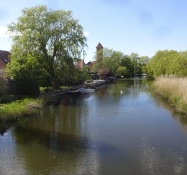 The enchanting Koege stream in the town centre of Koege

The first and longest break I made in the hills prior to the town to make coffee and visit Grundtvig's grave. The great hymn poet and church father is laid to rest out here in a rotunda bounded by a high wall and a wrought iron lattice along with others of his family's deceased. I knew this well and had also been here many years ago, but I still doubted whether I was standing in the right place, as his name was not mentioned on any tombstone or on anything else in there. I thought that this important man, the creator of the congretion of followers of Grundtvigianism and the author of a very large number of our most beloved hymns, must have a grave that reflected his uniqueness. But no! For it was indeed his grave I was facing, two women who were jogging in the hills. I guess, they were used to inform doubtful tourists about that thing. By that time I had slurped my coffee and was ready to delve into Koege's charming  town center. Here I wanted to visit the secretariat of the Danish Beer Enthusiasts Association. I'm a member and as such just wanted to see where it resided and maybe have a chat with its secretary Rie. But I could not find the doorway. The address remained a secret to me. Of course, I was also not able to have a beer in "Hugo's cellar" in the neighbourhood, as it was corona closed. So I rolled out of town southbound along small paths with an unresolved beer matter. I also wanted to shop for dinner, but did not find any shop, and then I was out among fields and woods again. Therefore, I decided to change my planned route to pass Stroeby Egede, where I assumed a supermarket. This way I would also follow the coast at a closer range. This time my plans worked, so I shopped for dinner regarding both wet and dry items. 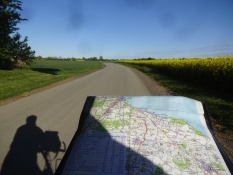 Easy biking in the low sun on the peninsula of Stevns 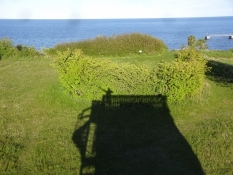 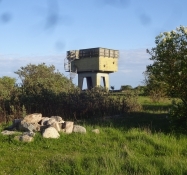 The last piece of cycling on the peninsula of Stevns out to the cliff I thoroughly enjoyed. It was not late and the weather was nice with boundless sunshine. The air was still cold and crisp, but as long as the sun was shining, it was okay. The steady westerly wind also helped me along, and I was looking forward to camp at Flagbanken, because it is a a luxury place among primitive tent sites. Before that I had a muesli break at the estate of Gjorslev. Later I learned that its owner here exploits the chalk deposits or Stevns klint commercially. Seems to be a good business. Not everything is high-tech. One can still make money by digging for cheap resources underground. At least the estate looked very well maintained and stylish, I reckoned. After refueling at Holtug church, in case they had corona closed the tap at the tent site, I reached the large area and had it all to myself this time. The Flagbanken site is part of Nature center Stevns, which presents Stevns klint as part of the UNESCO World Heritage Site to Danes and tourists. In addition, Flagbanken is a former military area from the Cold War, namely a missile radar base. The Nike missiles themselves were deployed further inland. Out here stood the fire control tower, where there is now a lookout tower and the radar, whose dome still looks like a large football. In one of the service buildings they've installed a bathroom and during  daytime an exhibition of fossils, found in and by Stevns cliff, is open. And it all worked to my great satisfaction. After testing the facilities, I started by climbing the spiral staircase of the lookout tower. The whole place was bathed in the evening sun and the large chalk quarry with its factory and shipping port was very visible and dominant just south of the tent site. Here, the path that goes along the cliff top had to make a big detour in order to omit the chalk quarry. Now I wanted to wash myself. I could forget a sea bath, because the sea whooshed very far down, the nearest stairs were far away and in the chalk quarry, access was forbidden. So I boiled a pot of water and had a primitive washing from the bathroom sink. After all, a shower or hot water was not available. 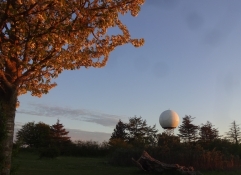 Today the camp site is part of the nature center Stevns 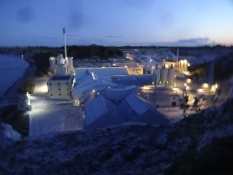 Its nearest neighbour is the chalk and limestone plant Orya 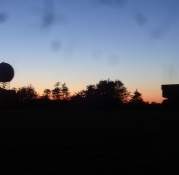 By now Mandehoved's  ("Man's head") only man had grown terribly hungry. So I prepared a meal with fried chicken fillets, gravy and pasta, which I washed down with appropriate amounts of beer. I cooked at a table-bench set and washed up afterwards. When I was done, the sun went down in a very beautiful sunset over South Zealand. It had grown nastily cold, so I wrapped myself well into several layers of clothing. While enjoying the idyll, the serenity and the peace, a car came roaring towards me. Out clambered a group of young people, very lightly dressed and everyone except the driver, I hope, were well drunk. The car radio played techno or something I hardly call music, at full throttle. They did not pay attention to me even though I was sitting on a large rock right by the parking lot. Luckily, the lightly dressed girls froze quickly, so the car soon disappeared again. The information boards did not interest them at all. Despite they did tell an exciting story about Stevns cliff being the place in the whole world where you are best able to see the remains of the meteor impact approx. 65 million years ago, which cost the dinosaurs their existence and thus paved the way for the triumph of the mammals, as they wore fur and were better able to cope with the years-long winter that followed the disaster at that time. It's a layer in the middle of the cliff called the fish clay. And indeed, from the lookout tower, the dark, burnt layer was clearly visible in the middle of the cliff with lime at the top and chalk at the bottom. I was stunned and felt like a lucky devil to be allowed to experience this unique rarity. And contemplated about the young people in the car. They missed a lot, but everyone can live life as he or she wants. Fortunately. Still, I do doubt whether the mammal's foremost species, homo sapiens, is degenerating when the next generation behaves so foolishly. As darkness fell, the temperature dropped rapidly, and I now only wanted to slip into my sleeping bag and save the rest of the cliff for tomorrow. I remember lying with cold fingers and toes for a long time, even though the latter were wrapped in my wife's home-knitted wool socks. In addition to the regular ones of course. But I still slept well on Mandehoved.