The ride from Agde to the bike path was easy and the streets werw not very busy. Then we cycled along road D612 on a cycle lane bordered by a concrete guardrail. Right of us the first fallow land. A little later, the tourist infrastructure began: campsites, caravan park, multi-storey "parking facilities" for motor boats,.... At the end of Marseillan-Plage began a beautiful bike path close to the dune. After one and a half kilometers, campsites and holiday homes began on the left side, and stretches out over 1½ kilometers. On this piece a briskly foot traffic crosswise to our direction, the tourists want to the beach. The next seven kilometers all almost 100 meters is a passageway from the bike path to the beach. As we got closer to Sète, the bike path became more and more a pedestrian area. Shortly after the start of buildings in Sète, the beautiful bike path stoped, we swam with the traffic. It went up the hill for a moment, then down again. At the port of Sète the restaurants line up. In the harbour some quite large fishing vessels. 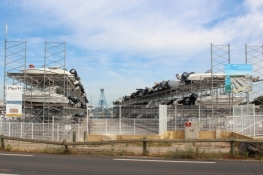 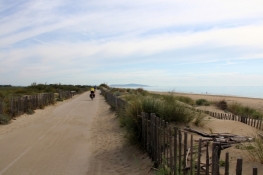 Bike path in the dunes east of Marseillan-Plage 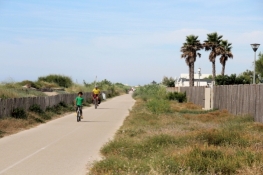 Bike path in the dunes east of Marseillan-Plage

Passageway from the bike path to the beach 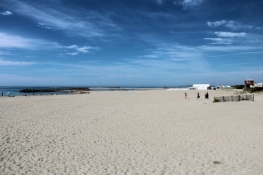 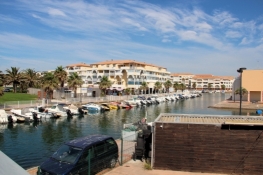 Sète, harbour in front of hotels 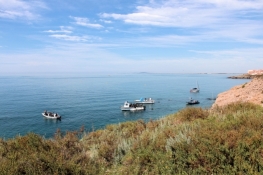 Sète, church in the old town 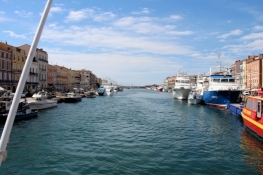 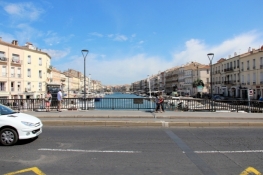 Thanks to the prepared track, navigating in Sète through the one-way streets was not a problem.

At the Quai des Moulins then we were largely away from the cars. At the end of this street, the first signposting for the cycle route appeared: EV8 and EV17 and ViaRhona were signposted. For almost a kilometer again a good bike path. We were almost alone here.

At the canal 500 meters bad surface, before we came to the small side road to Frontignan. This one could be cycled well, mostly a marked-off cycle path strip was present.

In Frontignan on residential roads to the canal, over the canal bridge and, without signpost, on the left passed underneath the railway line. There began the well-developed bike path that leads to Vic-la-Gardiole. 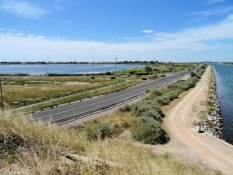 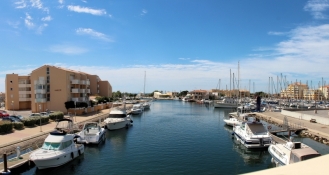 In Vic, a trip to the small medieval town was worthwhile. Around the fortified church Sainte-Léocadie are beautiful little streets and the "boulevard" of the village. 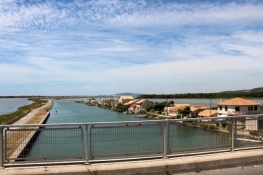 Beyond the railway line, the cycle path led across Mireval to Villeneuve-de-Maguelone. Here we followed due to missing or overlooked signs the well-developed bike path into the town. And continued on to Maguelone.

We were able to visit the former episcopal church Maguelone. Very dark inside, but despite the lack of equipment an impressive testimony of the architecture of the 11th and 12th centuries. 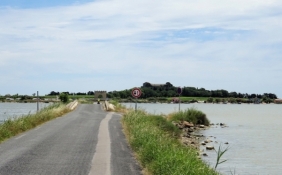 Entrance of the former cathedral of Maguelone 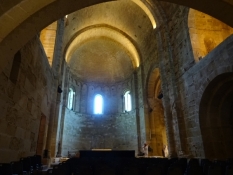 View from Maguelone to the hinterland 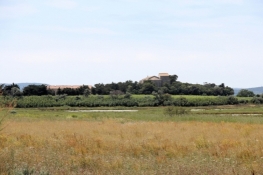 On the road along the beach we reached Palavas. There on road D62E2 we came back to the bike path that leads to Carnon-Plage.

In Carnon-Plage on the "Canal du Rhône à Sète" a misleading signposting that on gravelly road led us to a road sign "vehicles prohibited". We had to turn back. A little further another signage led us in the direction of the tourist information. There, too, we turned back. Finally we cycled on the planned track to the end of the village. There it continued on the well-developed bike path through the dunes and on the beach path of La Grande Motte. The beach path however was full of tourists who flocked from the beach to their cars or vice versa. A lot of caution was needed to pass through between them. At the roundabout to the D59 we rode, deviating from the official bike path, straight on the beach promenade of La Grande Motte. On uneven concrete slabs it was a bumpy ride. Also many pedestrians were out and about. To the left of us the buildings typical for Grande Motte. Before the the harbour we turned away from the beach and cycled a short distance on roads through the town. Then through park-like terrain again on concrete slabs, some with grooves in the direction of travel, which were dangerously deep and in tire width. 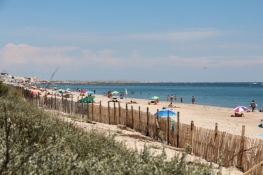 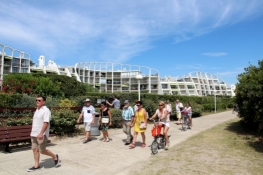 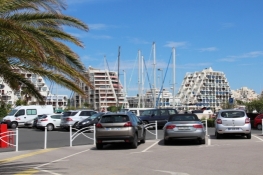 Back on the road, the bike path ran alongside road D255 on its own asphalt lane to Grau-du-Roi. There it went in-town on one-way streets. Beyond the bridge over the Canal du Rhône à Sète, we pushed the wheels through the streets of the old town. It was swarming with visitors pushing and shoving along the restaurants and shops. 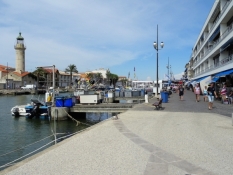 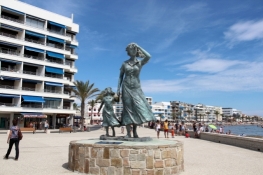 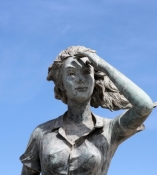 Behind Grau-du-Roi, the bike path is excellent again. With tailwind we were in Aigues-Mortes with brisk pace and there at the hotel.

Between Le Grau-du-Roi and Aigues-Mortes 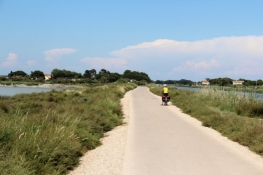 Between Le Grau-du-Roi and Aigues-Mortes 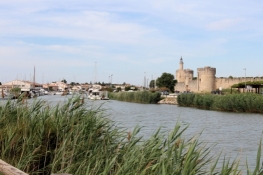 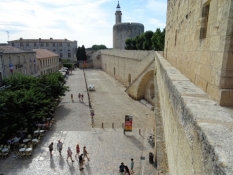 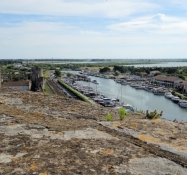 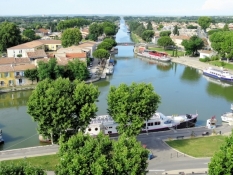 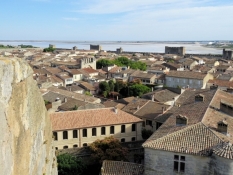 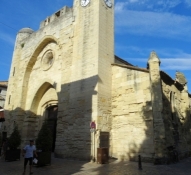 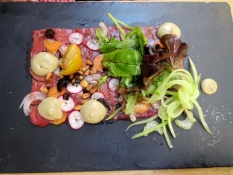 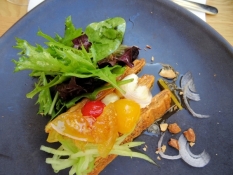