In the morning rain, later sunny and warm, slightly more chilly than the previous day. Light winds from North and West.

The third stage of the Iron Curtain Tour's fourth part from Tallinn to St. Petersburg.

Text message, May, 20, at 8.47. Goodmorning, dear friends. For the first time on my tour I woke up to the sound of rain on my tent fabric. Very surprising, as the day yesterday was perfect, including the weather with sun, WARMTH! (up to 25 degrees Centigrade) and almost no wind. Joonas and I spent a lot of time on the camp site yesterday morning. It was one o'clock before we rolled off. Our plans were to go along together for about 25 km and then part. Together we had a look at a derelict Soviet observation post with a watchtower on a peninsula into the Gulf of Finland. We had lunch in an aristocratic manor park near Vihula, before I sought back to the coastline and Joonas towards Rakvere, where he intended to stay for some days. He was a funny and insightful acquaintance, and we exchanged contact data. My next goal was now Kunda, where the Danish company FlSmidth ran a large cement works for many years. In Soviet times it covered all of the town with a thin layer of cement dust. Later the plant was sold and now there are installed filters. During the war the company exploited Jewish labour force from a concentration camp in the vicinity as slaves. I remember a TV 2 documentary (Jens Moeller), which I translated many years ago. Portkunda! Well, after a sip of late coffee and a cake in the sun I made it easily and quickly to this very modern and comfortable Mereoja Camping. It's my last night in the tent for more than a week, as I've booked hotels and hostels tonight in Narva and in Russia. For security reasons. To Narva it's 96 km. In the meantime the rain has stopped, and I want to have a morning swim in the sea. There are long and modern stairs down to a stony beach. I've almost only seen sandy beaches since Lithuania. Have a nice weekend. Read from me from Narva and the EU's outpost to Russia. Yours Helmuth. 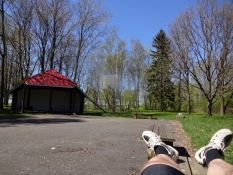 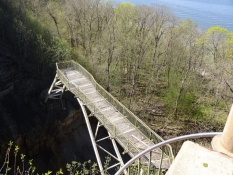 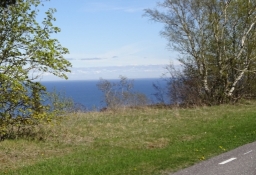 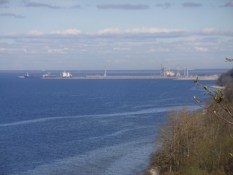 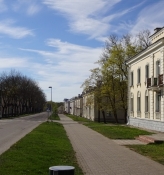 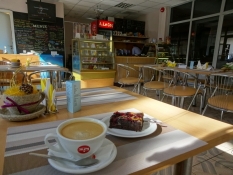 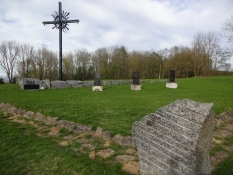 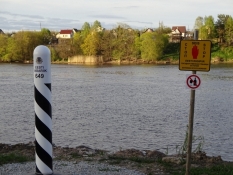 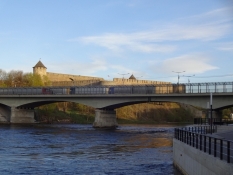 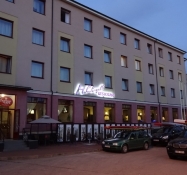 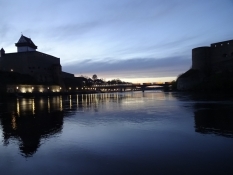 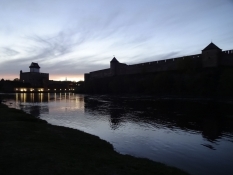 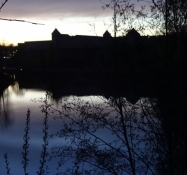 FB post, May, 20, at 23.48: Hi my faithful followers of all kinds here. After a little less than three weeks of cycling I've reached Estonia's, the European Union's, Nato's and thereby the West's outpost in Narva. On the other side of the river with the same name Russia begins. And doesn't stop before on the other side of the world. The last picture shows the two fortresses here: The Hermann Castle, a German baronial castle with Danish foundations. Also at that time Narva was the outpost towards Russia. Denmark sold her Estonian possessions to the German knights after a few decades. They were much to hard to colonize so far away from the mother land. But the knights kept the stronghold for many centuries.

It has been three fairly easy stages to this place from Tallinn. The weather was lovely, especially yesterday, up to 25 degrees Centigrade, very little (head)wind, beautiful coastal landscape with wild nature on the foil of the sea. And I enjoyed the company of a Finnsih far going cyclist, Joonas, who plans to cycle all the way to Hungary. Or perhaps only Slovakia or Poland. He's got three months and wants to go slowly along. He's a happy guy and we laughed a lot together. Only when the campsite's sauna was cold at half past eight in the evening he was a bit sour. Shortly after our routes went astray I visited Kunda with FLSmidth's cement works. In Soviet times they exploited the slack  environmental requirements and covered the town with a layer of cement dust. Unspeakably much worse was the exploitaion of Jews from a near-by concentraion camp as slave labourors. Also Sillamäe further to the east is marked by mining and industry. Here the Soviet Union produced  nuclear fuel for military and civil use. For this reason the town did not exist officially. Here in Narva everybody speaks Russian. That's way many language schools are placed here, where one can learn the language in a Russian speaking evironment and still be in the EU. This union I'll leave tomorrow morning by cycling across the Friendship bridge. The week in Russia will be the challenge in the challenge, so I'm quite excited. And a little bit nervous. My stage goal tomorrow is a brand new golf club half the way to St. Petersburg. Very expensive and luxurious. I'll have a chalet for myself and my aluminium fiancee. My route passes Kingisepp, Koporje and Lopukhinka to Gorki Golf Club. On Monday I'm on to Piter, which is St. Petersburg's nickname. Now the adventure really begins. Yours Helmuth.